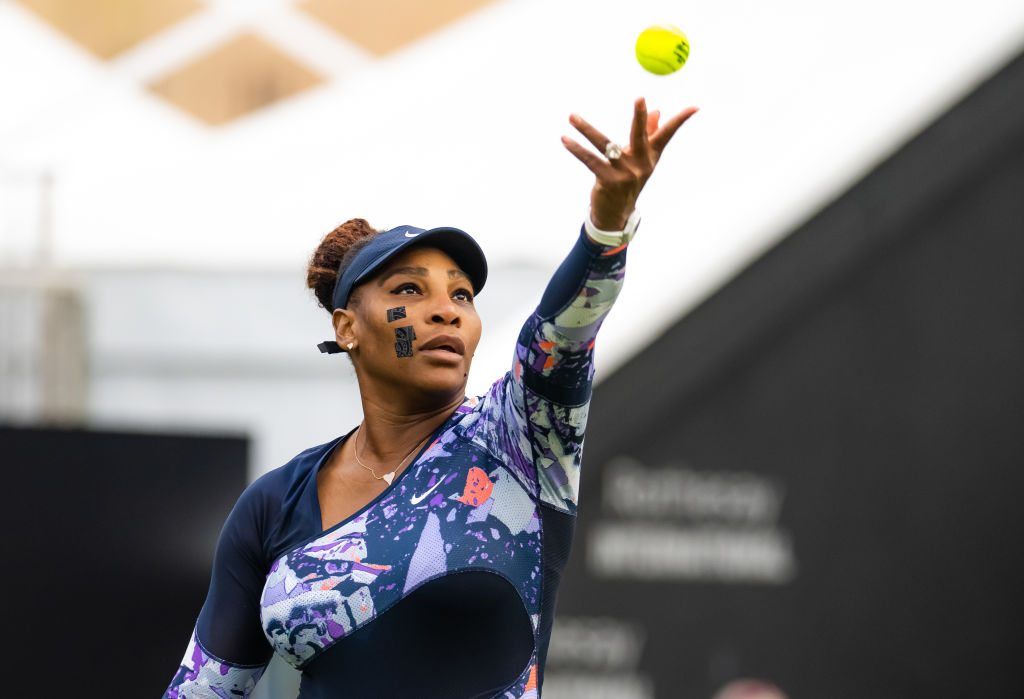 Serena Williams made her return to tennis after a 12-month break at the Rothesay International (Picture: Getty Images)

Tennis ace Serena Williams made her return to the sport at the Rothesay International following a 12-month break.

The 40-year-old athlete and partner Ons Jabeur came from a set down to beat Sara Sorribes Tormo and Marie Bouzkova in the women’s doubles.

The tournament came ahead of Williams’ return to Wimbledon next week, where she was given a wildcard into the singles draw.

But her appearance in Eastbourne gave fans a reason to talk for more reasons than one.

Many questioned what was on the star’s face as she played, and why?

What does Serena Williams wear on her face when she plays?

Williams was seen wearing black plasters or medical tape on her face during her last match.

The reason for this was because she suffers from sinus problems, according to The Times, and wearing them relieves pain and pressure.

Speaking to Reuters, Williams shared some tips to deal with sinus problems.

She said: ‘To avoid some of the trouble, it’s important not to use so much ice in your beverages. Sometimes that stops you up and makes you get a lot of pressure.

‘I’ve learned taking hot, hot showers, as hot as you can stand it, helps clear those passageways. And working out helps a lot. That keeps you clear, keeps your chest clear, and keeps everything clear.

Serena wears the tape on her face to relieve pain and discomfort caused by sinus problems (Picture: Getty Images)

‘I’ve got the working out part right, but I’m still working on ice in my drinks because I like my drinks cold all the time.’

Why did Serena Williams take a break from tennis?

During her last Wimbledon appearance, the tennis veteran left the competition 34 minutes into the first set of her first-round match against Aliaksandra Sasnovich due to a leg injury.

Williams slipped and injured her hamstring during the tournament, leading to a year-long break from tennis.

Neither Serena Williams, nor her sister Venus, were included on the Wimbledon 2022 entry list when it was released, but she posted a picture on Instagram of her trainers on grass, with the caption: ‘SW and SW19. It’s a date. ‘2022 See you there. Let’s Go.’