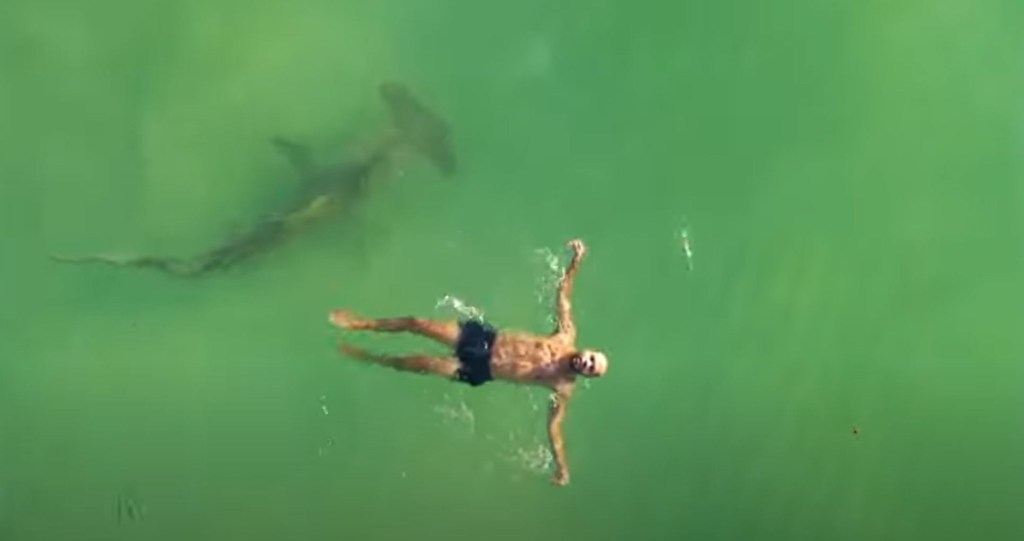 Sharks are popularly imagined as ocean predators that prefer the solitude of the open ocean to bustling coastlines.

But that may not be the case.

Researchers at the University of Miami carried out a study showing that, contrary to what we thought, sharks aren’t avoiding our rapidly urbanising coastlines.

Three species of sharks: bull, nurse and great hammerheads had their movements tracked around the Miami shoreline. And while the team expected the creatures to steer clear of human influences: bright lights, loud noises and chemicals in the water – the opposite was true.

‘We were surprised to find that the sharks we tracked spent so much time near the lights and sounds of the busy city, often close to shore, no matter the time of day,’ said Neil Hammerschlag, director of the UM Shark Research and Conservation Program and the lead author of the study.

Some animals, like pigeons and racoons, thrive in cities.

The researchers call these creatures ‘urban exploiters,’ and note they often become dependent on humans for food.

Other animals, known as ‘urban adapters,’ may show some use of urbanized areas, but still largely rely on natural areas. On the other hand, some species, like wolves, are sensitive to human disturbance and classed as ‘urban avoiders’.

‘Few studies have investigated the movements of ocean predators in relation to urbanisation, but since other studies have shown that land predators are urban avoiders, we expected sharks to be too,’ Hammerschlag said.

The researchers concluded that the behaviors of the tracked sharks resembled urban adapters.

The study speculates sharks could be attracted to shore from land-based activities, such as the discarding of fish carcasses.

Unfortunately, there are inevitable problems that arise from sharks coming into close contact with humans more frequently.

‘By spending so much time close to shore, sharks are at risk of exposure to toxic pollutants as well as fishing, which could impact their health and survival,’ said Hammerschlag.

While shark bites on humans are rare, the study also pinpoints areas close to shore that could be avoided by people to reduce the possibility of a shark bite.

White Sox get dash of instant offense from Tim Anderson

Laura Whitmore hits back after Love Island viewers accuse her of ‘humiliating’ Remi Lambert with rap: ‘He deserved to have his time’