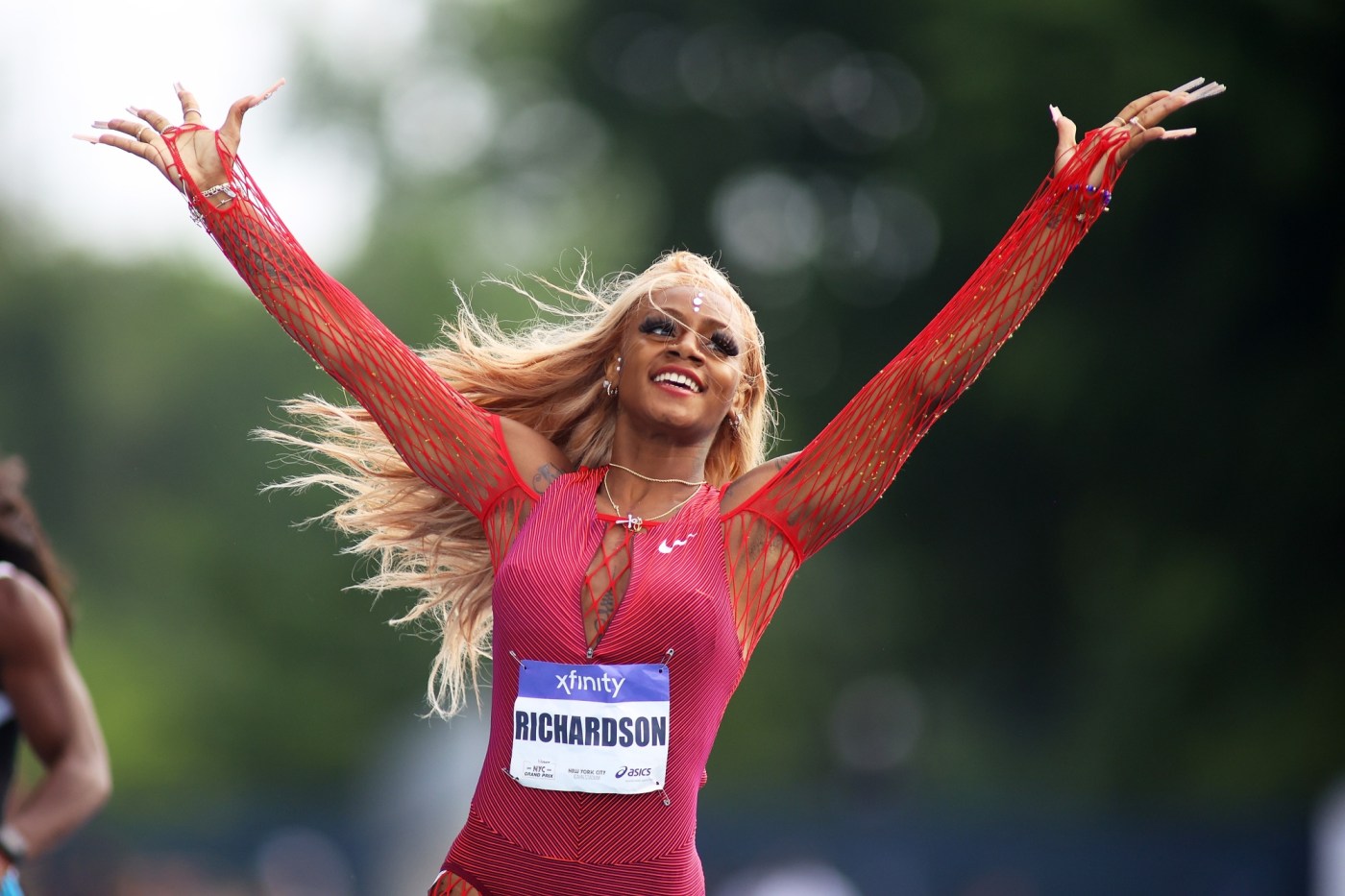 “This sport been quiet for too long,” the sprinter tweeted on June 7.

Translation: Richardson, the 22-year-old lightning rod, the fastest female American sprinter in more than a decade, was about to get loud on and off the track.

In the ensuing days and weeks Richardson has taken on the U.S. Anti-Doping Agency and NBC’s “Today Show” on social media, and solidified her position as the world’s fastest fashion statement by showing up at the USA Track & Field New York Grand Prix suited up in a feet-to-shoulders red fishnet body suit beneath a hot pink uniform unzipped in front somewhere between PG-13 and R, a bejeweled forehead between long flowing blonde locks and multi-diamond studded lobes.

“That’s me always standing out no matter my performance, no matter what the media or what other people have to say, I’m expressing myself and showing people no matter how the company, media, people may try to limit you, always stand by your truth,” Richardson told reporters after the meet. “So I express that by what I wear.

“It’s not about just running fast. It’s about being who I am and you can be anything to anybody.”

Richardson arrives at the USA Track & Field Championships this week in Eugene as both the sport’s most recognizable and most polarizing athlete.

The 22-year-old Texan in the past year has inspired talk that she could take down Florence Griffith-Joyner’s nearly quarter-century old world 100-meter record of 10.49 seconds. And she has exasperated the sport by testing positive for marijuana at last June’s Olympic Trials resulting in a 30-day suspension that prevented her from competing in the Olympic Games.

The suspension was followed by a series of high profile social media skirmishes and an expletive laced interview on national television after finishing dead last in her first race after the doping ban was lifted.

To others, she’s a time bomb equally capable of touching off an international controversy as she is clocking a mind blowing time.

“The only reason I’m on social media is to see what she’s posting,” Renaldo Nehemiah, Richardson’s agent, acknowledged to reporters after the New York meet.

To her friends and fans, she is a heroine for and of her times whose outspokenness resonates with many who feel they haven’t been heard; a misunderstood superstar whose thoughtfulness and empathy are hidden beneath brash and loud protective shell.“That’s my little M&M,” Gatlin said. “She’s very hard on the outside but a big ol’ soft teddy bear on the inside.”

For others she is an obnoxious, profane self-promoter, too quick to shoot from the lip, too quick to hit tweet; a rube ready to take on the world but yet not realizing who she’s up against.

“She didn’t know who Max Siegel is” until earlier this month, Nehemiah admitted. Siegel is the CEO of USA Track & Field, the sport’s national governing body.

For years, one of Contra Costa’s most brutal homicides remained unsolved. Then a letter — addressed to police — arrived from prison

Kyiv Pride Still Happened This Weekend—500 Miles Away in Warsaw

Before they were Angels teammates, Mike Trout helped David MacKinnon hit for power