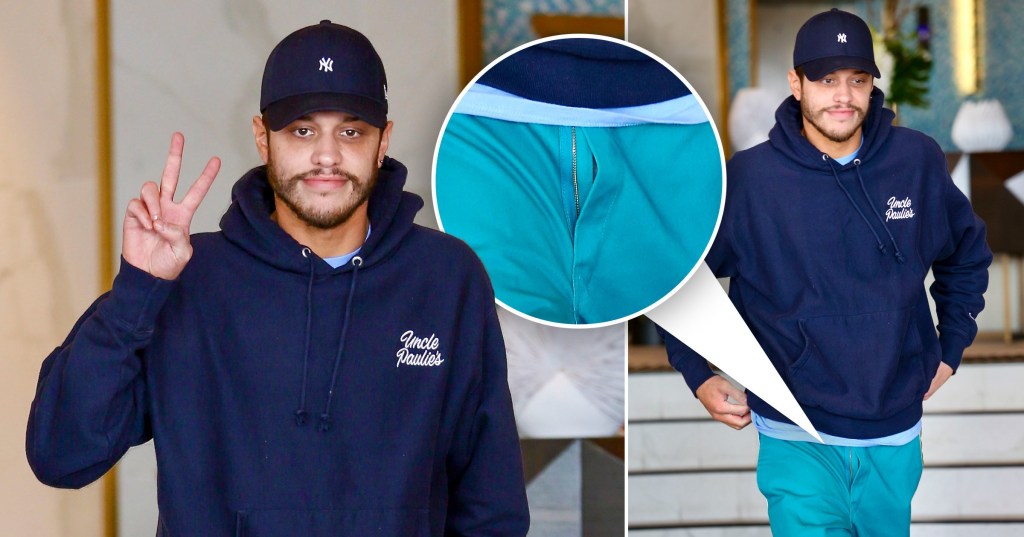 Pete was caught out as he left his hotel in Australia (Picture: SplashNews)

Pete Davidson was spotted out in Cairns, Far North Queensland on Sunday for a solo stroll but appeared to be suffering from a slight wardrobe malfunction.

Having jetted to Australia to work on a new film sans girlfriend Kim Kardashian, the former Saturday Night Live star, who recently quit the show after eight years, seemed to have forgotten a final but rather crucial part of dressing.

Decked out in a navy hoodie, baseball cap and beige boots, the 28-year-old had forgotten to zip up the flies of his teal trousers before leaving his hotel.

However, Pete either didn’t notice or styled it out, flashing a peace sign at waiting photographers as he exited the building.

He also happily posed for pictures with fans outside, smiling as they kept a bit of polite Aussie distance from him.

The comedian and actor is in Cairns to shoot new movie Wizards!, alongside Orlando Bloom, Naomi Scott, Franz Rogowski and Sean Harris, which is written and directed by the Australian David Michôd, who helmed Netflix’s The King with Timothée Chalamet.

Just last week, Pete had poured cold water on rumours that his 41-year-old billionaire girlfriend Kim had visited him Down Under, after an Australian café was said to be telling porkies after claiming to local press that they had dined there together.

They even added juicy details including claims the pair requested a private room after security demanded staff turn in their phones to ensure privacy.

However, Pete’s reps told Daily Mail Australia: ‘Pete is currently in production in Australia without Kim,’ while a source close to Kim also confirmed she hadn’t been in Australia in years.

His reps previously had to deny that girlfriend Kim Kardashian had joined him in Australia (Picture: Getty)

Kim also revealed the measures she took ahead of introducing her four kids – North, Saint, Chicago and Psalm, whom she shares with estranged husband Kanye West – to Pete.

The couple were first linked after appearing in a Disney-themed sketch on Saturday Night Live in October, but Kim was in no rush to welcome him into the fold.

During an appearance on the Today Show, she told hosts Hoda Kotb and Savannah Guthrie that she consulted therapists and sister Kourtney Kardashian over the move.

The couple had previously enjoyed a mini-break together, ahead of his work commitments (Picture: Instagram/@kimkardashian)

‘Luckily I have a sister that has been through it all, and we talked about it,’ she began. ‘I consulted with a few therapists and friends that have been through it.