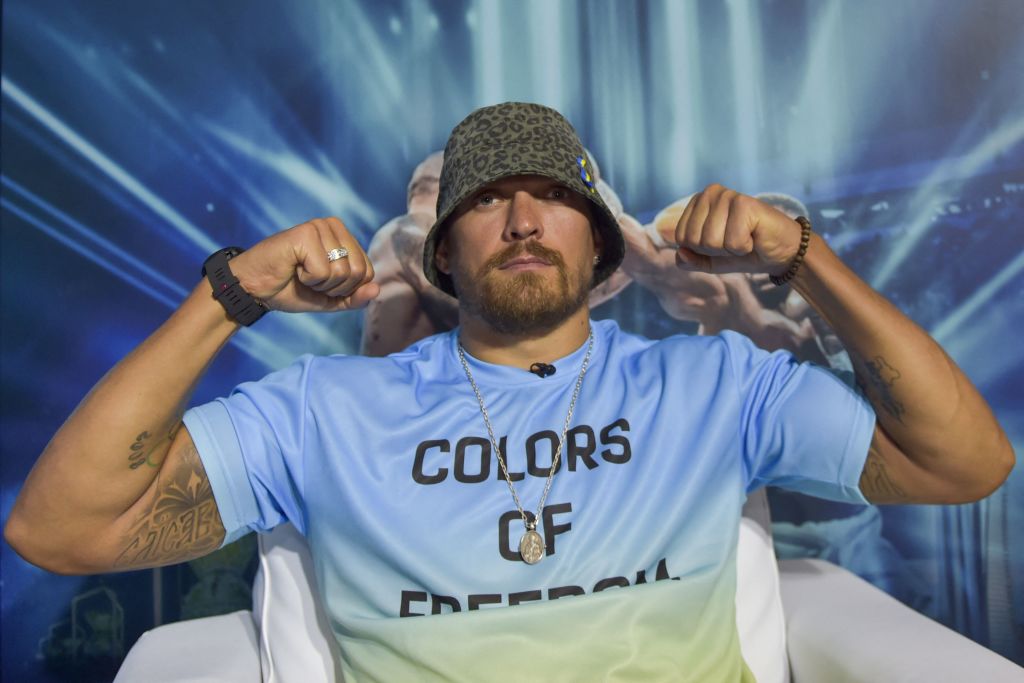 Usyk wore a ‘colours of freedom’ shirt with the Ukraine colours on Tuesday (Picture: Getty)

Oleksandr Usyk has dismissed the suggestion the ongoing war between Ukraine and Russia will give him extra motivation against Anthony Joshua this summer.

Last September, Usyk travelled to London and became the IBF, WBA and WBO heavyweight champion after dethroning Anthony Joshua with a masterful performance.

Six months later however he was returning to Ukraine following the invasion of his homeland at the end of February, joining Kyiv’s territorial defence forces.

The 35-year-old was pictured in military gear carrying an assault rifle during his time back home. In late March however he was given permission to leave to begin preparing for his rematch against Joshua, insisting: ‘I will help my country more and it’s better than being in territorial defence and running around Kyiv with a machine gun.’

Usyk and Joshua will fight again on 20 August in Saudi Arabia, coming face-to-face on Tuesday during a press conference in Jeddah.

And the champion insists he can take no motivation from what is happening back home as he heads into his first heavyweight title defence.

‘My friends and people close to me, they have died in the war. When so many people are suffering I don’t have any idea how it can influence anything positively,’ Usyk said.

‘I was there for one month and I saw with my own eyes what happened there… the rockets flying and fighter jets flying. It’s horrible.’

Joshua meanwhile is looking for revenge on Saudi soil for the second time in his career, having beaten Andy Ruiz Jr in Riyadh in December 2019 following a career-first defeat to the American six months earlier.

‘The great thing is I’ve got a second chance,’ Joshua said.

‘What got me into boxing in the first place – when I was a youngster I got in a little bit of trouble every now and again and I was blessed with a second chance and I found boxing. And I took it with both hands. So if you know me and a lot of my story, you know I’m the comeback king.

‘You can put me down. But it’s difficult to keep me down.’

Which character does Euphoria actor Javon Walton play in The Umbrella Academy season 3?

Why Buy Now, Pay Later could be coming at too high a price