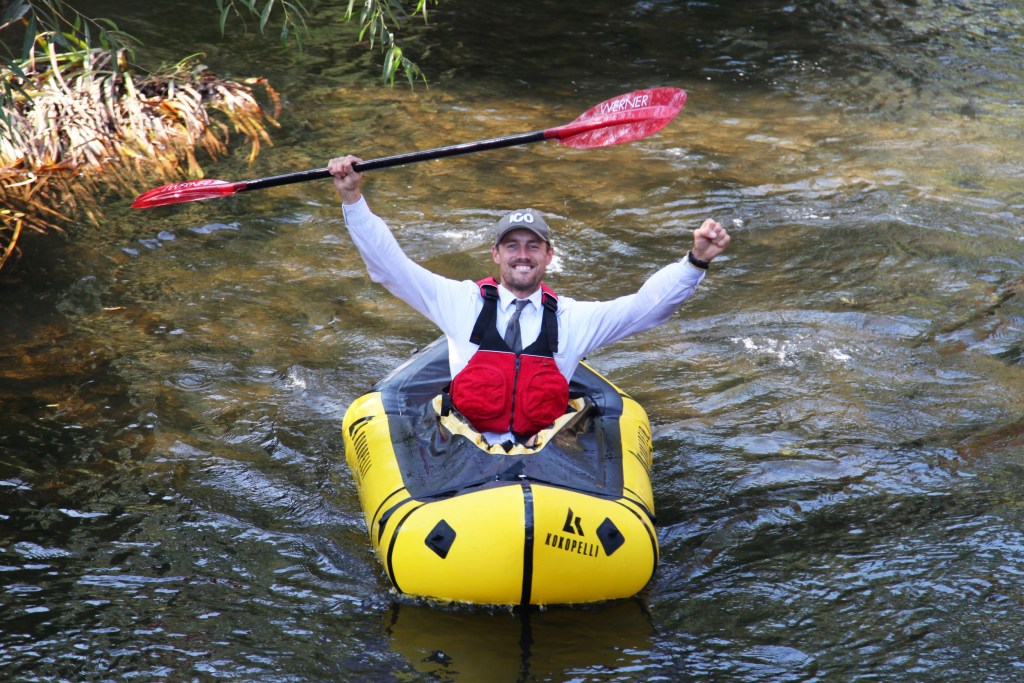 Commuters have been plunged into transport hell this week, with the biggest rail strikes the UK has seen in three decades – but one man in Wales has had zero problems getting to work.

George Bullard, 33, has beaten the walk-outs by continuing his normal method of kayaking down a river to his office.

Every morning, he paddles down the River Lugg for half an hour to Presteigne.

The explorer says his £74 inflatable kayak has ‘saved him thousands’ – not to mention, there are no queues on the water.

He was inspired after going on a mammoth kayaking trip across the North Atlantic Ocean – racking up 1,200 miles from Greenland to Scotland.

‘It is an exceptional way to get to work’, George said. ‘I paddle in and back like any normal commuter.

‘Because the kayak is blow-up, I can just deflate it and put it in my backpack, although it’s a stretch to say I blend in.

‘It cost me £74, and I reckon it has saved me thousands. I commute completely differently because adventures are part of my life.’

But he says ‘I guess that’s part and parcel of being an adventurer’ and claims ‘sometimes getting to work and getting wet can be empowering’.

While he doesn’t recommend his mode of transport for everyone, he has encouraged others to be creative.

He said: ’It does take a lot of experience to be able to do this. The river is exceptionally dangerous and shouldn’t be entered without a qualified instructor.

‘It is nice to not have to worry about being stuck in traffic and if I was in a car it would cost me a fortune.

‘I would encourage everyone to find different means of commuting to work and ditch the public transport and cars.

‘Whether it be walking, cycling, rollerskating or scootering, it is so good for your mental, physical, emotional and spiritual wellbeing.’

MORE : How to check whether your train has been cancelled

MORE : Boris in 11th-hour plea to transport staff – with hours until UK grinds to halt

Amazon wants to make Alexa sound like your dead relatives