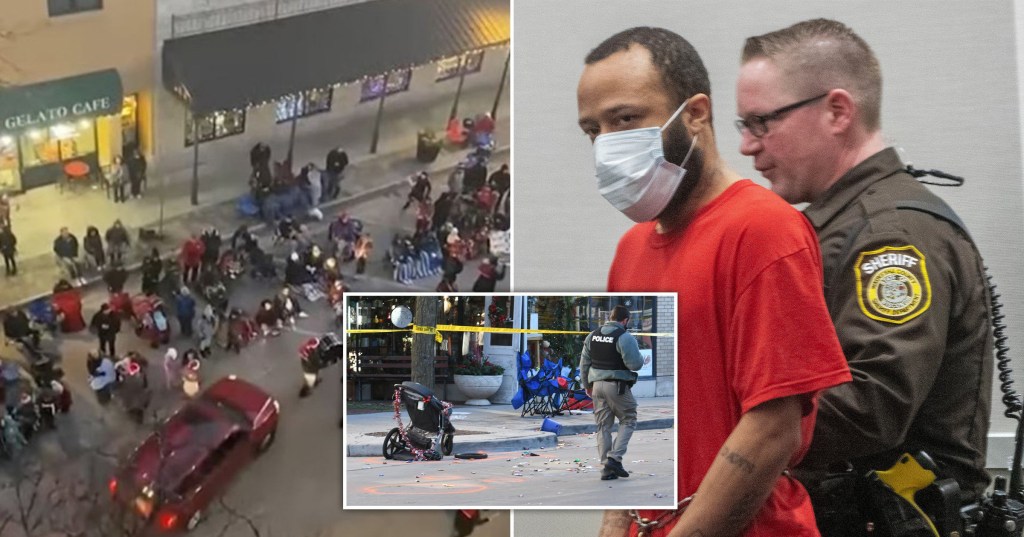 Darrell Brooks has decided to mount an insanity case following the tragedy last fall at a Christmas parade in Waukesha, Wisconsin (Pictures: Rex/AP/Getty)

The man accused of killing six people and injuring dozens more when he allegedly drove his SUV through a Christmas parade in Waukesha, Wisconsin, last year has changed his plea to ‘not guilty by mental disease or defect.’

An attorney for Darrell Brooks, 39, revealed he was changing his plea from ‘not guilty’ to ‘not guilty by mental disease or defect’ while in court on Monday.

Brooks has been ordered to undergo a mental health evaluation, according to Waukesha County court records.

Brooks faces over 80 charges in connection to the November 21 attack on the suburban Milwaukee city, including six counts of homicide. He originally pleaded not guilty to the charges in February, but has since decided to mount an insanity defense.

His attorney, Jeremy Perri, did not elaborate on why he changed his plea.

The change was announced after Judge Jennifer Dorow denied a request to move the trial out of Waukesha County or bring in jurors from outside the area. Attorneys for Brooks have argued that the publicity around the incident would prevent him from having a fair trial in the county.

While the judge acknowledged the massive amount of media coverage the incident received, she also said that interest in the story appears to have waned, and that jurors aren’t required to be ignorant of a case.

Brooks is accused of driving his SUV through a crowd of parade attendees, which included young children and elderly people, during a Christmas celebration in the community. He has been held at the Waukesha County Jail since and is being held on $5million bail.

The six counts of first-degree intentional homicide he has been charged with represent each of the individuals who died during the attack. Each charge carries a life sentence if convicted.

He faces a total of 83 counts related to the incident.

Design for a nuclear-powered ‘flying hotel’ with swimming pool unveiled

How to tell someone they’re a bad kisser