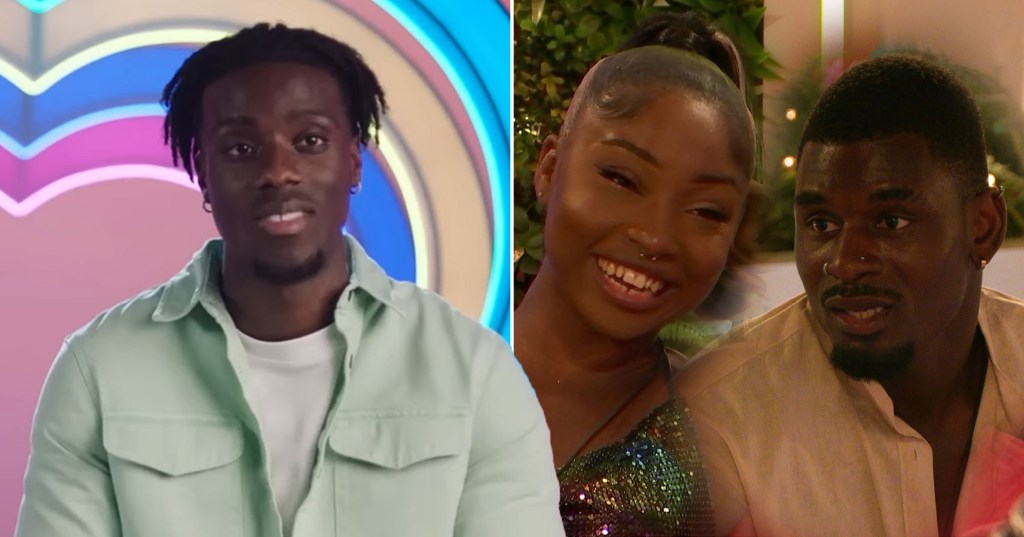 Ikenna was dumped from the villa last night (Picture: ITV/Rex)

Love Island dumped star Ikenna Ekwonna is sure to be thrilled to find out how loved his social media accounts already are when he returns home.

Ikenna was one of two islanders who were kicked out of the villa on Tuesday night, alongside Amber Beckford.

The pair were coupled up with Indiyah Polack and Dami Hope respectively, who have now gone on to crack on with their own flirtation.

But as fans reacted to the new romance at home, one person who was particularly vocal was the brains behind Ikenna’s hilarious social media.

Last night’s episode saw Dami and Indiyah lock lips for the first time during a challenge of Truth Or Dare, before enjoying another passionate kiss later on.

This was quickly followed up with: ‘AY NAH THIS MUST BE STAGED.’

After a few more hilarious posts, the account wrote: ‘Ikenna’s team have called the police and they are now escorting me off the premises, bye guys.’

NAH WHAT MY CORPSE AINT EVEN COLD YET INDIYAHHHHH #LoveIsland

It came after weeks of brilliant reactions from his friends and family running the account, and we’re sure Ikenna will be very happy with their work.

They signed off their reign of chaos by sharing: ’We couldn’t be prouder of Ikenna as his team. He stayed true to himself in the villa and was honest about how he felt till the end! Thank you for rocking with him guys!

Fans swamped the account with praise, with one writing: ‘The person behind his account should of been in the villa instead 😂 #LoveIsland.’

‘I’m going to miss Ikenna’s Twitter handler. He was the best thing about #LoveIsland this season,’ someone agreed.

‘This person running this account is jokes 😂😂😂😂 #LoveIsland,’ a viewer added.

Another commented: ‘Whoever is running @ikenna_ek account should keep doing it. You’re doing amazing sweetie.’

Elsewhere, Dami and Indiyah are now way out in front as favourites to win Love Island, at 5/1 odds according to Ladbrokes.

Alex Apati of Ladbrokes said: ‘Dami and Indiyah’s odds have tumbled significantly over the last few days, and having been rank outsiders this time last week.