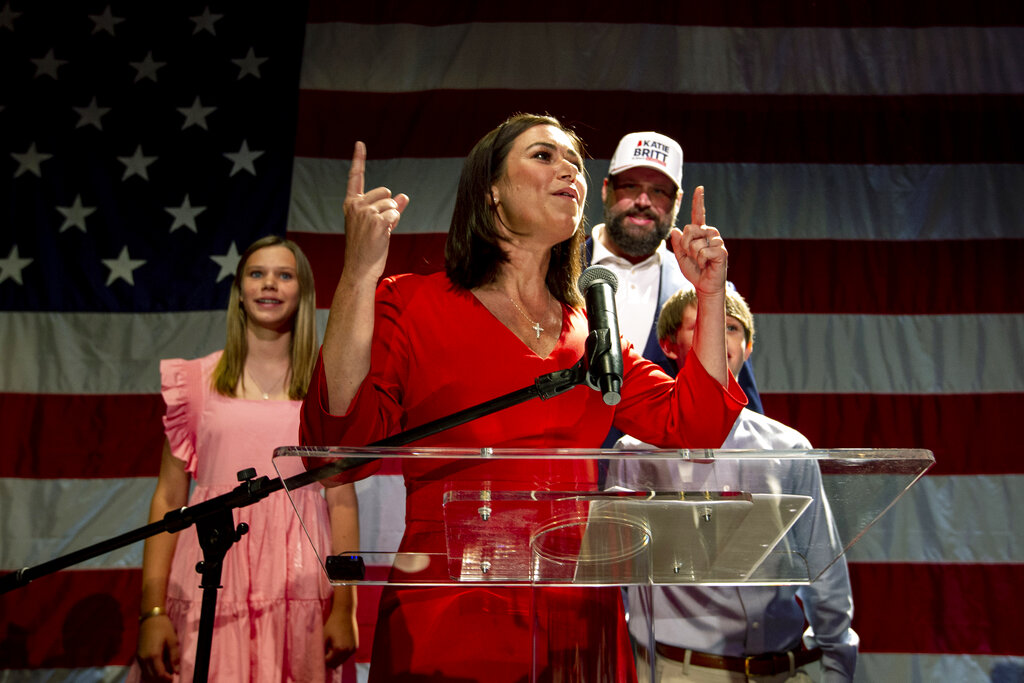 The loss ends a turbulent campaign that pit Brooks, a conservative firebrand who has spent more than a decade in Congress, against someone who has never held elected office. Brooks ran under the banner “MAGA Mo” and fully embraced Trump’s election lies. But that wasn’t enough for the former president, who initially backed Brooks in the race to replace Britt’s former boss, retiring Sen. Richard Shelby, but then pulled his support as Brooks languished in the polls.

The race was among a handful of contests held Tuesday at the midpoint of a primary season that has been shaped by Trump’s effort to influence the GOP.

By the time Trump backed her earlier this month, Britt was already considered the favorite in the race. She emerged as the top vote-getter in the state’s May 24 primary, but just missed the threshold that triggered a runoff. Still, Tuesday’s result gives Trump a win at a time when his influence over the GOP has come under scrutiny.

The former president has had a mixed record of success in backing candidates this election season, helping lift Senate contenders in Pennsylvania and Ohio while floundering elsewhere, particularly in Georgia. Voters in the onetime Republican stronghold rejected his efforts to unseat the state’s GOP governor and secretary of state, both of whom rebuffed his extraordinary pressure to overturn the results of the 2020 presidential election. And his trouble in the crucial swing state deepened Tuesday as two of his endorsed congressional candidates faltered in their GOP run-off elections.

Trump persuaded Jones to run for the seat and drop his long-shot bid for governor to clear the field for his chosen candidate, former Sen. David Perdue. Perdue lost to Republican Gov. Brian Kemp, who endorsed Collins. The seat is being vacated by Republican Rep. Jody Hice, who also lost his bid to unseat Republican Secretary of State Brad Raffensperger, another top Trump target.

Meanwhile, in Washington, D.C., Mayor Muriel Bowser won the Democratic nomination to serve another term, fending off a pair of challengers amid concerns over rising crime and homelessness.

But the Alabama Senate runoff had drawn particular attention because of the drama surrounding Trump’s endorsement and because the winner, who will face Democrat Will Boyd in November, is considered the overwhelmingly favorite in the Republican state.

Britt, 40, cast herself as part of a new generation of conservative leaders while disparaging Brooks, 68, as a career politician. If victorious in November, Britt will be the first woman elected to the U.S. Senate from Alabama and one of its youngest members. The state’s previous female senators had been appointed.