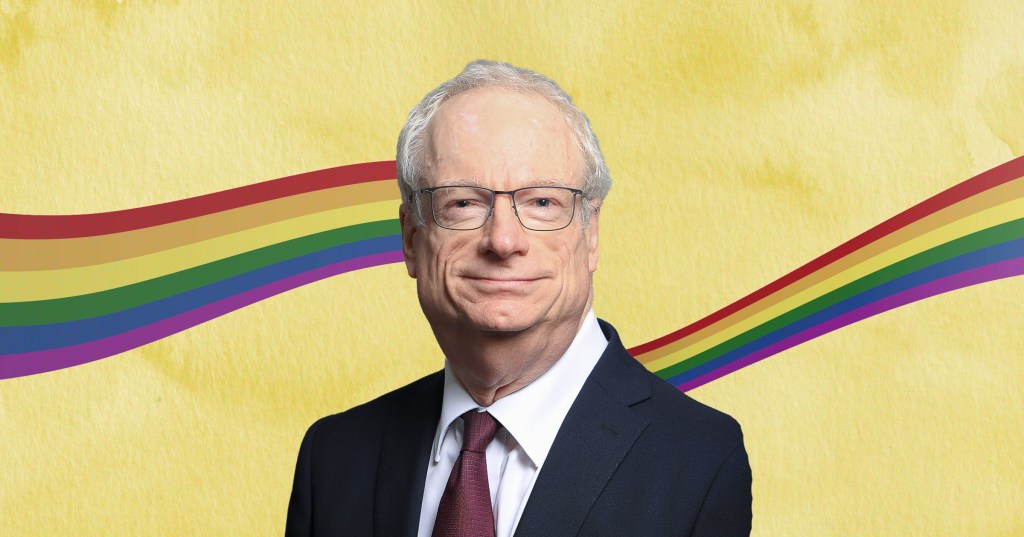 Lord Chris Smith, 70, came out to the world at a rally in the 1980s to a five-minute standing ovation (Picture: Getty Images)

Chris Smith remembers walking out on stage in 1984, scared stiff and hands shaking.

He had written a ‘very boring’ speech on the train as he travelled to speak at a gay rights rally – but 10 minutes before he was due to speak, he made a snap decision.

Rather than make comments that would be forgotten within days, he was going to make history.

After walking up to the platform, he told his crowd: ‘Good afternoon. My name is Chris Smith. I’m the Labour MP for Islington, South Finsbury and I’m gay’.

With those words, Chris became the first-ever openly gay MP, and later the first gay cabinet minister – after Labour’s late Maureen Colquhoun confirmed herself as Britain’s first openly lesbian MP in the 1970s.

The bravery both politicians showed paved the way for others – with the UK having more LGBTQ+ lawmakers than anywhere else in the world after the last election.

Over the years, Chris, who served in Tony’s Blair’s government, has continued to fight against dangerous prejudice and became the first MP to announce he was living with HIV in 2005.

Speaking to Metro.co.uk about his place in LGBTQ+ history on Pride Month, the 70-year-old has told readers to ‘be proud about who and what you are’.

Chris, who now sits in the House of Lords, knew he was gay a decade before he was elected in 1983, but had never shared his sexuality with the world.

The right moment ‘had never presented itself’ – and the fear homophobia would lose him votes lingered uncomfortably in the back of his mind.

The right occasion finally arose when Rugby Council decided to withdraw protection for discrimination against sexual orientation in what was named a ‘ban on gays’.

Although the council denied discriminating, one councillor named ‘all homosexuals vile and perverted people’, while the leader said ’we are not having men turn up for work in dresses round here’.

‘I can remember sitting on the train to Rugby and writing this mundane speech’, Chris said.

‘But when I arrived at the hall, about 1,000 people were there and I remember just thinking, “if I’m going to do this, this is the moment”. It was one of the scariest 10 minutes of my life.

‘The wonderful thing though was that the audience got to their feet and gave me a five-minute standing ovation on the spot. It made me rather proud.’

Chris faced abuse in the street following his speech, while some colleagues ‘almost deliberately looked the other way in the corridor’.

Alexandra Ocasio-Cortez thanks Olivia Rodrigo for voicing disgust over US Supreme Court abortion ruling during Glastonbury set: ‘Moments like this make a huge difference’