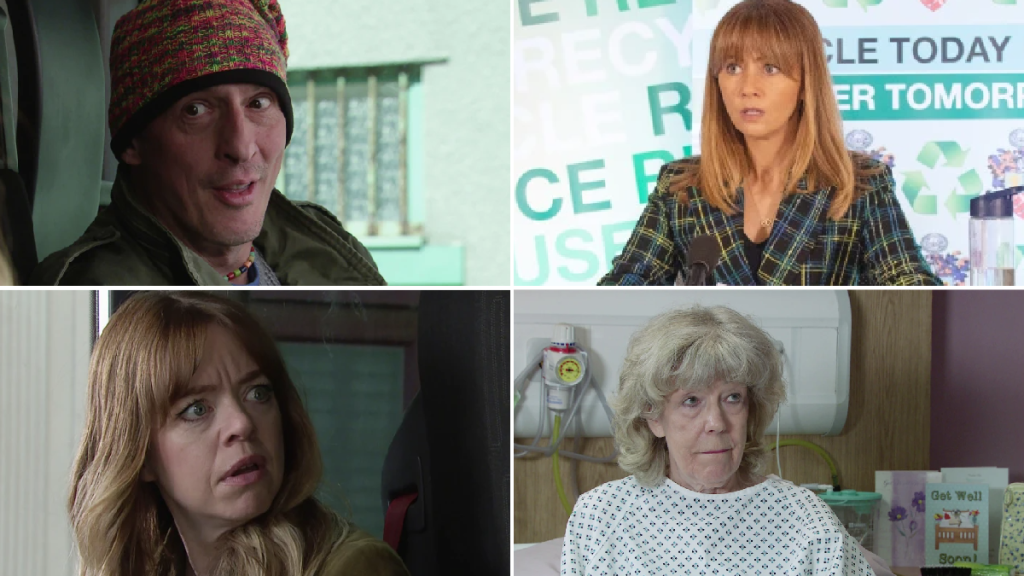 A blast from the past hits the cobbles (Picture: ITV)

Toyah Battersby (Georgia Taylor) is seriously struggling as she faces murder charges and she soon distracts herself by throwing her energy into a big local campaign in Coronation Street.

But she is stunned when she soon comes face to face with her old eco warrior sweetheart Spider Nugent (Martin Hancock).

They have some catching up to do!

Elsewhere, there’s torment ahead for Maria Connor (Samia Longchambon) as the vile campaign against her takes an even more sinister turn.

Gary’s raging as a devastated Maria’s shaken by how convincing the deep-fake video is. (Picture: ITV)

A stressed Maria bites Max’s head off in the barbers as she worries about the video, while coming under fire from her neighbours over their unemptied bins.

Carla warns Peter to think carefully about rejecting the life-changing sum of money on offer from Thorne. Simon also points out to his dad that a hundred grand could change their lives forever.

As Peter begins to waver, Thorne clocks their exchange. Meanwhile Peter meets up with Tricia the nurse and, realising she can’t offer any new evidence, confides he’s thinking of giving up the fight.

Stephen apologises for blaming Gail for Audrey’s accident and offers to broker peace between mother and daughter.

At Audrey’s bedside, with Gail in tow, Stephen firmly warns her that if they don’t patch things up, he’ll be on the first plane home. Will Audrey thaw towards Gail? There’s a frisson of attraction between Stephen and Elaine as he thanks her for her help.

Todd tells George today’s the day to expose Frank’s bullying ways. When George reveals Frank once flushed his head down the loo for spilling water on him, Todd forms a plan and sloshes a drink down Frank’s shirt. How will Frank react?  Ed’s not happy to hear Tim talking to Ronnie about how Aggie is feeling neglected by her husband and accuses Tim of meddling in their relationship.

Maria decides that being on the council isn’t worth all the strife it’s putting their family through. (Picture: ITV)

A Thorne in Peter’s side

As they await the verdict on Thorne from the GMC, Carla urges Peter to be grateful for his health and focus on their future.

Thorne meets Peter in the pub and orders him not to undo all his skilled work and embrace the second chance he has to live. As Thorne gets into his car Peter can no longer contain his …read more

Which Love Island stars have kids?