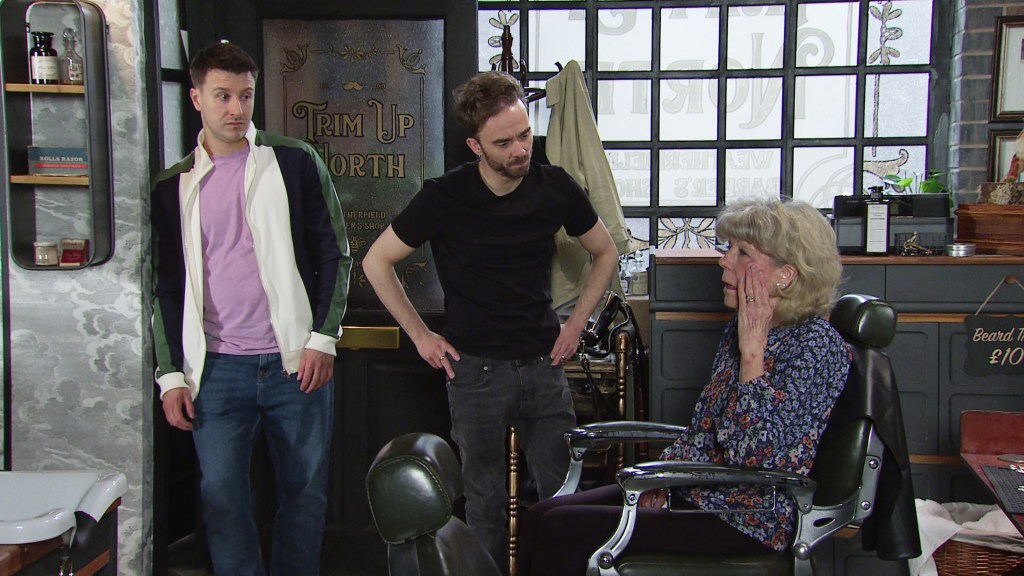 Flirting with Ryan, getting drunk at work, it was quite the day for Audrey (Picture: ITV)

Audrey Roberts (Sue Nicholls) in Coronation Street has taken a drunken fall in the barbers.

The iconic character has been a cause for concern in recent weeks, with many Weatherfield residents noticing she drinks far too much.

For Audrey, she’s been ignoring people’s comments, convinced everyone wants her to spend her days at home, with her feet up, doing a spot of knitting.

After spending the morning at the pub, Audrey arrived at the barbers ready for her first shift.

Amazingly, despite the fact she stunk of booze, Audrey did a pretty good job at the haircut and even received a tip!

That afternoon, Ryan (Ryan Prescott) arrived for his appointment.

Audrey soon began flirting, offering Ryan a beer, and played table football with him after, with David (Jack P Shepherd) and Kelly (Millie Gibson) watching on.

With Audrey on her own, Gail (Helen Worth) arrived and once again, tried to tell her mum she drinks too much.

Audrey failed to listen and as night fell, she tried to call Street Cabs for a taxi home.

What does Serena Williams wear on her face when she plays tennis and why?

With Audrey’s eyesight already not in the best condition, the darkness made it very difficult for her to see.

Reaching for her glasses, Audrey bumped into the motorbike, causing it to fall on top of her.

We know during Friday’s episode, Elaine (Paula Wilcox) and Brian (Peter Gunn) will hear Audrey crying out for help, after being left there all night.

This will also coincide with the return of Stephen (Todd Boyce) – but how will he react when he learns the Platts failed to notice Audrey was missing?

Boris Johnson taken to hospital for operation under general anaesthetic