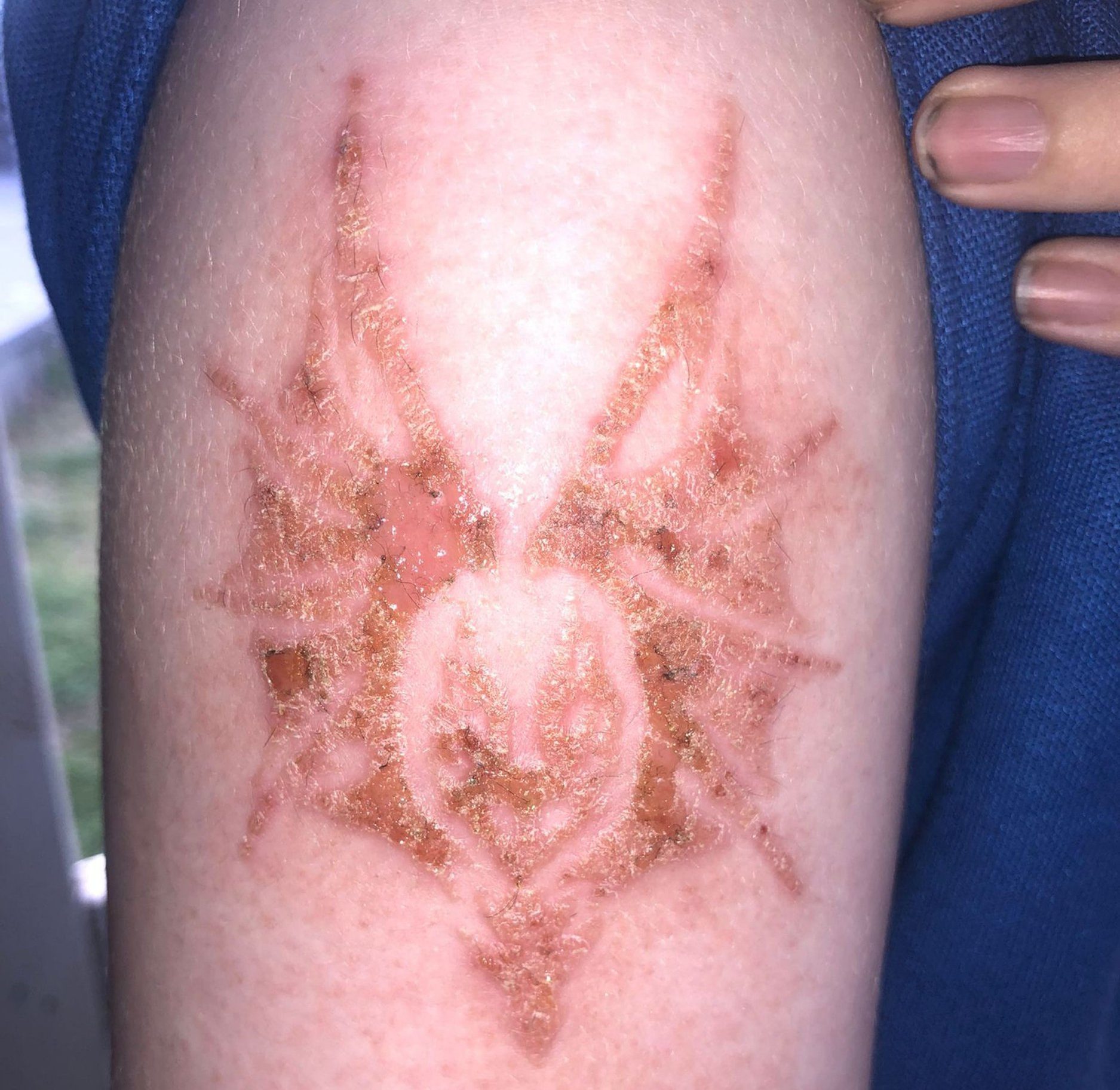 Caden Humphreys got a black henna tattoo on the last day of his holiday (Picture: Kennedy)

A schoolboy has a scar on his arm after suffering chemical burns from a black henna tattoo.

Caden Humphreys, 10, was on holiday with his mum Lynne, and a group of friends in Turkey when he had a dragon drawn on his arm on their last day.

But nearly two weeks later he suffered an allergic reaction that became infected, causing the skin to split and ooze yellow liquid while blisters spread across his body.

Black henna tattoos cause problems for dozens of tourists every year despite advice not to get them.

Lynne, who lives on Anglesey, said: ‘When I Googled them after we came home because of Caden’s reaction, it wasn’t until then that I realised how bad they [reactions] are.

‘If I’d have known then what I know now, there’s not a chance that I would have let him have it done. I just wanted to make sure that no other child gets it really.

‘Even though two of the party had no side effects whatsoever, next time we go back they would never be allowed to have one, just in case.

His allergic reaction left him with blotches all over his body (Picture: Kennedy)

She said that she let him get the tattoo on the last day of their trip in case it became affected by the Turkish sun.

Lynne said: ‘The tattoo was applied and left for an hour before rinsing the rest of the henna off. All was fine and we flew home – he loved the tattoo and was showing his family and friends.

‘It started itching and irritating him [12 days later] and you could feel bumps under it, so we removed it with make-up remover.

‘We thought that was okay and that we’d gotten away with just a light mark but then it just started getting worse after that.

‘He reacted really badly. It became inflamed, raised, quite hot and angry, and then went bad from there and got infected.

‘He said it was hot and burning but it wasn’t really painful until it started cracking and weeping.’

Caden’s mum Lynne is urging other people not to get black henna tattoos (Picture: Kennedy)

A doctor prescribed a steroid cream and antibiotics for Caden but the pus continued to weep through his clothing.

They have been monitoring it at home and he finally returned to school on June 13, nearly a month after getting the tattoo.

Lynne said: ‘I was panicking a little bit. I thought he would have to have intravenous antibiotics because it was spreading quite quickly, the small spots were coming up as we were sat with him.

‘They were little tiny blisters that were spreading from the infection.

‘He started getting a bit worried and a bit emotional. I think he was worried that it was never going to stop. It was weeping yellow fluid. It wasn’t very …read more

Stock Market: Suez Canal Update! Floating!
Why you need to look after your vocal health – and how to do it

‘One of the best days of my life!’ – Arsenal confirm signing of Matt Turner from New England Revolution