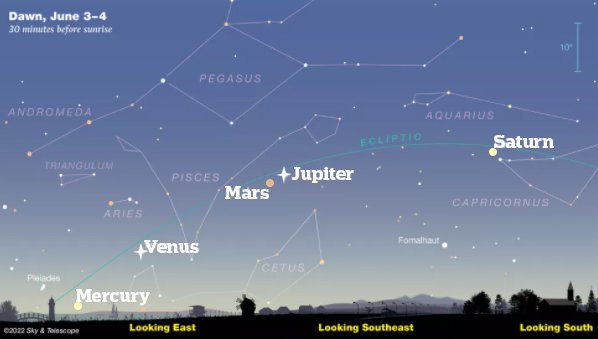 A planetary parade will take place in the night skies above the UK this week for the first time in 18 years.

Mercury, Venus, Mars, Jupiter and Saturn will form a planetary alignment across the sky for the first time since December 2004.

Four of those planets have been visible since the beginning of June but this week Mercury will climb higher in the sky to join the line-up.

It’s especially good news for stargazers in the northern hemisphere as we’ll have the best vantage point to see our celestial neighbours.

The five distant worlds will shine in a row as they travel the plane of the solar system, known as the ecliptic.

And while they may appear close together in the night sky, each one is actually millions of miles away from the other.

When is the best time to see the planetary alignment?

Your best chance at gazing out at the other planets of our solar system will fall in the early hours of Friday morning.

Early risers will be able to see all five planets in the sky above them (Credit: MailOnline)

On June 24, all of the planets will be illuminated and you should have a good chance to see them, providing you’re happy to get up very early.

The planets will rise above the horizon at the following times:

At 4.44am, the sun will start to rise and the planets will become increasingly hard to spot. So your best window is to be outside looking upwards between 4.30am and 4.45am on Friday.

If you want to be up earlier to see the planets rise, the good news is that it’s only a crescent moon – so you won’t have a lot of moonlight interfering with your view.

Do I need any special equipment to see the planets?

If weather patterns are clear, you should be able to see the planets with the naked eye.

That means there’s no need to dig out the old binoculous or frantically search Ebay for a telescope.

However, given that the planets will be appearing low in the sky, you’re advised to seek a high position and ideally away from buildings or trees.

Try to avoid tall buildings and trees to get a clearer view of the planets. (Credit: Sky & Telescope)

If you can find a good vantage point, then the view will be worth it.

‘Planetary conjunctions traditionally have been more the stuff of astrology than serious astronomy,’ said Mitzi Adams, a Nasa astronomer and researcher in a blog last month, ‘but they never fail to impress during observations, particularly when the gas giants are involved.’

What is a planetary alignment?

Planetary alignments occur when the orbits of the visible planets bring them into the same region of the sky, when viewed from Earth.

There are times when the more distant planets, like Uranus, also …read more

How to wake yourself up and become a morning person

Darren Bailey gets the golden ticket: Trump endorsement in GOP race for governor