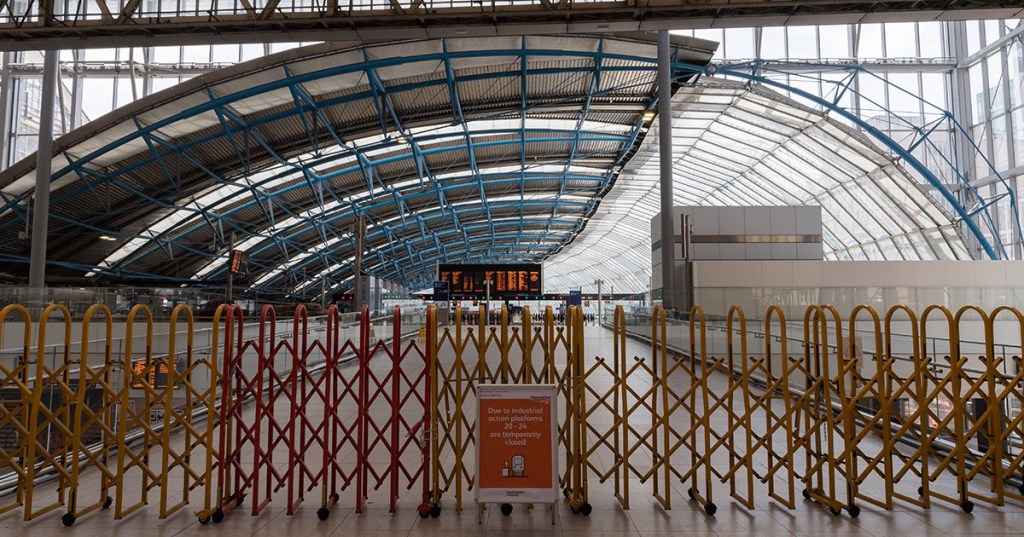 The UK’s rail network has been crippled this week by strikes over pay, job cuts and conditions (Picture: Getty Images)

Ministers have announced plans to change the law to allow businesses to use skilled agency workers to plug staffing gaps during strikes.

The move comes as tens of thousands of railway workers stage a second strike in a bitter dispute over jobs, pay and conditions.

Ministers pointed out that under current trade union laws, businesses are restricted from supplying temporary agency workers to cover for strikers, saying it can have a ‘disproportionate impact’.

The Government says its legislation will repeal these ‘burdensome’ legal restrictions and help mitigate against the impact of future strikes.

However union leaders have raised concerns that bringing in less qualified people to carry out certain rail jobs will endanger people’s safety.

Subject to parliamentary approval, the changes are made through a statutory instrument and are set to come into force over the coming weeks and will apply across England, Scotland and Wales.

The Government says its new plan will mitigate the impact of future strikes (Picture: Getty Images)

Business Secretary Kwasi Kwarteng said: ‘Once again trade unions are holding the country to ransom by grinding crucial public services and businesses to a halt. The situation we are in is not sustainable.

‘Repealing these 1970s-era restrictions will give businesses freedom to access fully skilled staff at speed, all while allowing people to get on with their lives uninterrupted to help keep the economy ticking.’

Transport Secretary Grant Shapps said: ‘Despite the best efforts of militant union leaders to bring our country to a standstill, it’s clear this week’s strikes did not have the desired impact due to more people being able to work from home.

‘However, far too many hard working families and businesses were unfairly affected by union’s refusal to modernise.

‘Reforms such as this legislation are vital and will ensure any future strikes will cause even less disruption and allow adaptable, flexible, fully skilled staff to continue working throughout.’

The Government also announced it is raising the maximum damages that courts can award against a union, when strike action has been found by the court to be unlawful.

For the biggest unions, the maximum award will rise from £250,000 to £1 million. A Network Rail spokesperson said: ‘This is welcome news and could help us to offer a better service to our passengers during strike days if this dispute drags on.

‘While key safety-critical roles require many months of training, there are many …read more