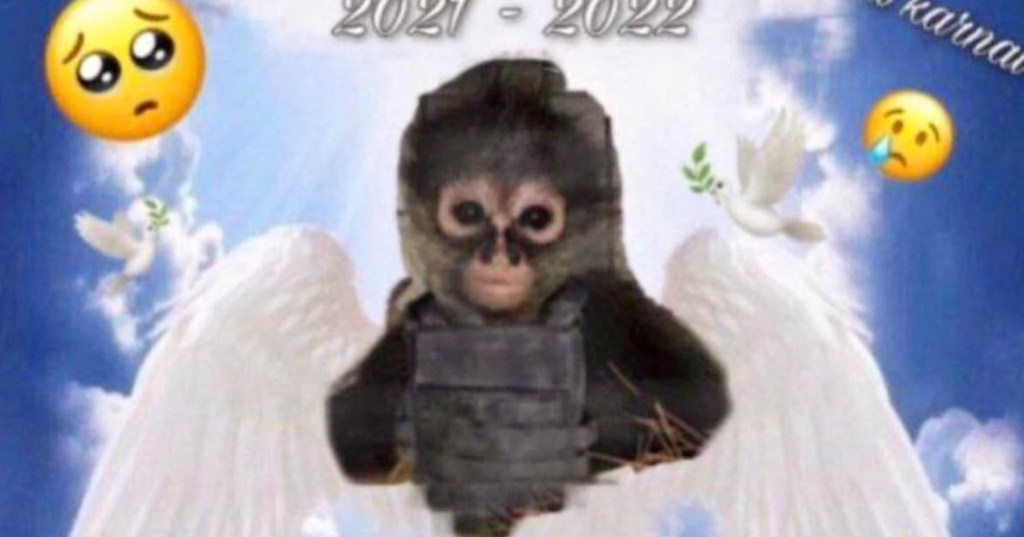 The spider monkey was wearing camouflage and a ‘bullet-proof’ vest (Picture: CEN)

A monkey dressed in a tiny ‘bullet-proof’ vest became the victim of a drug gangland shootout in Mexico last week.

The animal, also wearing a specially-made camouflage jacket and a diaper, was pictured sprawled across the body of a dead gunman, suspected to have been his owner.

It is unclear why the apparent owner of the spider monkey had a plastic bucket on his head.

Tributes for the animal – dubbed ‘El Changusto’ and aged one according to social media posts – have been pouring in.

Various memes also bare a resemblance to reaction to the death of Harambe, a gorilla killed in a zoo after grabbing a young boy who got into his enclosure in 2016.

The monkey quickly got his own ‘corrida’ – the traditional Mexican folk ballad often composed in honour of drug lords.

‘Life is very short, it wasn’t the monkey’s turn (to die),’ the ballad said.

Meanwhile, a 450-pound (200 kilogram) tiger was seen wandering the streets of the Pacific coast state of Nayarit, and another man died after trying to pet a different tiger in a cartel-dominated area of western Michoacan state.

Authorities in the State of Mexico confirmed the authenticity of the monkey photo but said it was unclear whether the animal died in the hail of bullets that killed his apparent owner.

‘An autopsy will be carried out on the animal by a veterinarian specialised in the species’.

There was a big cartel shootout in Mexico and someoneâs pet monkey got killed 🙁 ð¹ pic.twitter.com/X4AZwVDgYP

They added that animal-trafficking charges could be considered against the arrested suspects who survived the shootout.

A day after the shooting, the Attorney General for Environmental Protection said it had seized a tiger in Tecuala, Nayarit, near the border with Sinaloa, which is home to the cartel of the same name.

The office said it acted ‘after receiving reports about a Bengal tiger that was wandering the streets,’ and found that the animal was being kept there illegally.

Video posted on social media had shown a young woman shrieking as she came across the tiger on the street in a residential neighbourhood.

Authorities said the tiger’s claws and fangs had been removed, and later in the footage a man can be seen tossing a rope over the tiger’s neck and leading it away.

The shootout between police and a drug cartel in Texcaltitlan, Mexico, resulted in a number of arrests (Picture: CEN)

As an asylum seeker, I worry every day about the Home Office deporting me to Rwanda

Netflix bosses pay tribute after The Chosen One actors die in horror crash: ‘We are deeply saddened’