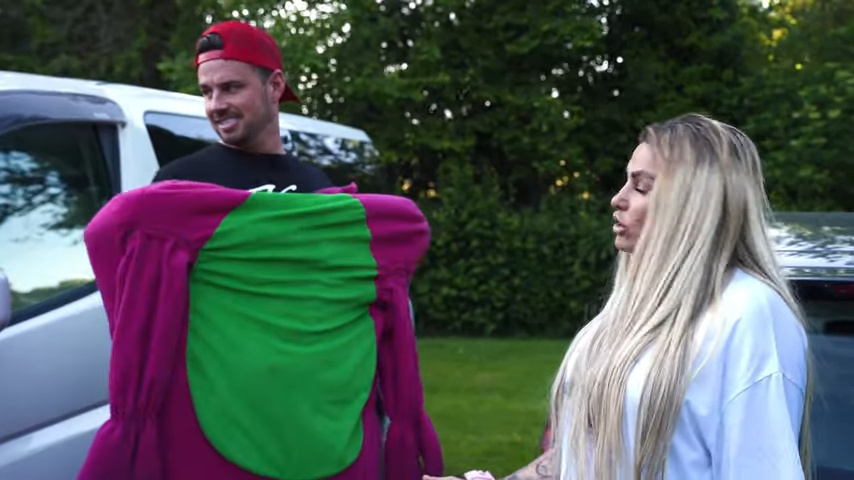 Harvey Price got a special surprise for his 20th birthday as mum Katie Price arranged for a visit from his favourite TV character, Barney the Dinosaur.

Katie, 44, shared a video of Harvey’s 20th birthday celebrations, revealing what Harvey had received for his birthday.

Among his gifts was a red bus toy he had first had as a baby, an iPad with a waterproof cover for filming under water, personalised mayonnaise and a knife and fork set with his name on it, and he had been treated to a night in a log cabin which he loves.

Katie had also arranged a special visit from Barney, making fiancé Carl Woods, 33, dress up as the purple dinosaur and drop off some DVDs for Harvey.

Carl was seen struggling into a slightly too small Barney costume with a large mask through which he struggled to see, also putting on an American accent so Harvey wouldn’t realise it was really him.

The car dealer told the camera: ‘You’ve got to do it for him, he’s going to to love it. This will make his day. I legit can’t see where I’m going.’

Comparing the head of the costume to an iconic scene in Friends, Carl added: ‘If any of you have ever seen Friends where Joey puts his head in a turkey, that’s what I feel like.’

As Carl came strolling down the path to the cabin to surprise him, Harvey could be seen beaming with joy before reaching out to give him a big hug.

Harvey could be seen bouncing with excitement and squealing with joy as he met his favourite character in real life.

Barney gave Harvey two DVDs as a gift, leading him to jump up and down and say: ’Thank you very much Barney!’

Others added: ‘That was awesome I cried the whole time .. a mothers joy is seeing that smile Harvey had on’ and ‘Honestly my heart melted seeing Harry so happy. Happy birthday Harvey… Katie you do an amazing job.’

Another commented: ‘Wow that was precious, so much excitement and joy at meeting Barney! Harvey is a real joy to watch and I love every minute of it. You are an amazing mother to him and don’t ever forget it. Happy birthday Harvey hope you had a fantastic day.’

US lawmakers pass gun control legislation, sending it to Joe Biden to sign into law