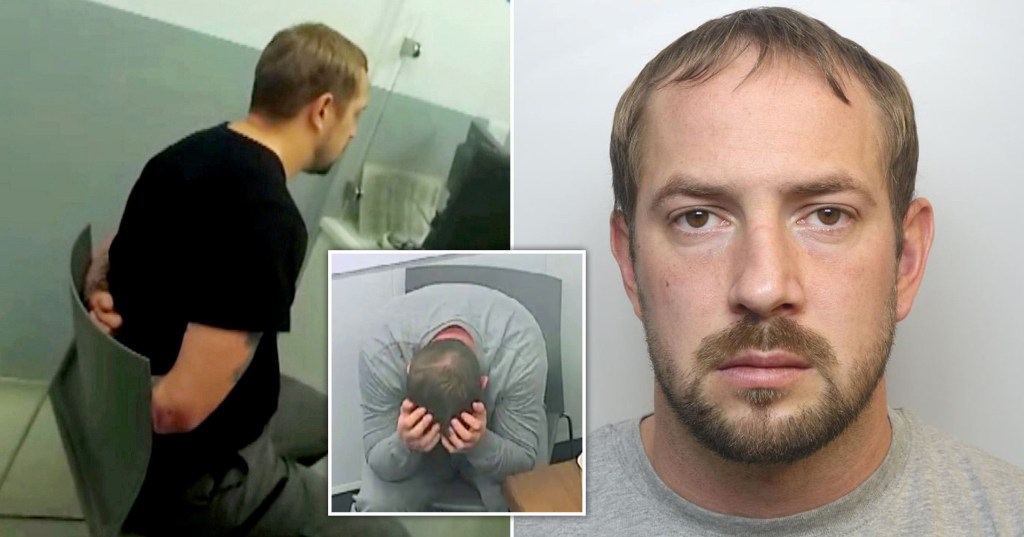 Collin Reeves used the ceremonial dagger given to him when he left the Army (Pictures: Avon Somerset Police/SWNS)

A former commando who stabbed his neighbours to death following a row over parking has been jailed for at least 38 years.

Collin Reeves, 35, used the ceremonial dagger given to him when he left the Army to kill young married couple Stephen and Jennifer Chapple while their children slept upstairs on November 21.

He had been involved in a long-running dispute with them over designated parking on the new-build housing development in Norton Fitzwarren, near Taunton in Somerset.

Reeves, a former Royal Engineer, was caught on CCTV climbing the fence separating their back gardens and entering the Chapples’ back door. Within seconds Mrs Chapple can be heard screaming in terror, with the ex-soldier shouting, ‘die, you f***ers, die’ as he stabbed them both six times.

Mrs Chapple, 33, did not even have a chance to get up off the sofa and try to defend herself, while her husband, 36, was found close to the door.

Reeves called the police to tell them what he had done but later denied murder, instead offering a guilty plea to manslaughter on the grounds of diminished responsibility.

At the police station he appeared confused and gave his name as ‘Lance Corporal Reeves, sir’ and his service number before saying: ‘I was just doing my job – it was an operation.’

But a jury convicted him of murder at Bristol Crown Court last week.

The judge, Mr Justice Garnham, jailed him for life on Tuesday with a minimum term of 38 years.

Reeves is a former commando royal engineer (Picture: Rex/Shutterstock)
He was convicted of both murders last week (Picture: Avon Somerset Police/SWNS)
A lit candle and picture frame next to floral tributes left near the scene at Dragon Rise in Norton Fitzwarren (Picture: PA)

The court heard the Chapples and Reeves previously had a good relationship but it had deteriorated when Mrs Chapple learned to drive and bought a second car.

Rows over parking spaces escalated to the point that both Reeves’ wife Kayley and Mrs Chapple had told their friends they were anxious about bumping into each other on the school run.

Ten days before the killings, Reeves was caught on a door bell camera approaching Mrs Chapple outside her house following an earlier exchange between her and Mrs Reeves.

He accuses Mrs Chapple of ‘f***ing gobbing off you cheeky little bitch’.

Diana Ross recognises honour as she gets Glastonbury security team dancing along to Upside Down: ‘I was waiting for you guys!’

Wicker Parker camp for boys cheered as ‘fun,’ ‘welcoming’ as it aims to build the ‘whole person’