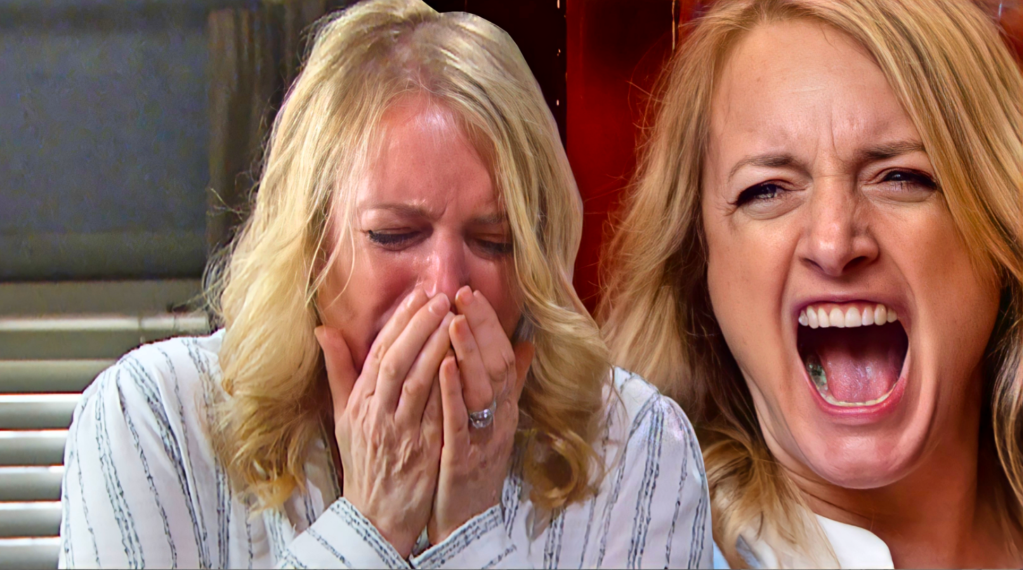 Nicola has a ‘complete crisis attack’, according to star Nicola Wheeler (Picture: ITV)

Nicola King (Nicola Wheeler) is struggling in Emmerdale after she was set upon and attacked by a group of teenage girls.

The councillor was brutally attacked in a carpark last week, before being treated in hospital for her injuries.

The assault has left her unable to leave the house. ‘Her home is a safe haven,’ actress Nicola King told Metro.co.uk. ‘We leave Nicola for a week. We don’t see what’s going on.

‘And then we come back to her, and we realise that what is slightly agoraphobia has now turned into monophobia as well.

‘She’s not even comfortable being on her own, in her own house.

‘So initially, it is her safe haven, the home. And then it turns into a prison, because she’s equally terrified of being on her own as she is of being outside.’

Nicola finds herself with little choice but to leave her home next week, when she’s forced to pick the kids up from school.

Things take a turn, however, as she becomes overwhelmed with thoughts of her attack and thus slams on the accelerator, colliding with David Metcalfe’s (Matthew Wolfenden) van!

‘David’s cross,’ explains actress Nicola, discussing the aftermath of the collision. ‘He comes out and shouts at her. “What are you doing? Did you not see me?”.

‘If she had looked, it was clear that he was coming, and she just didn’t, because her focus had turned inward, into her house. She was reliving the attack, and that was what was happening in her mind.

Nicola is struggling in the wake of the attack (Picture: ITV)

‘David shouts, because David’s got his own stresses going on at this time. And obviously he doesn’t realise the effect he’s having on her. And she says, “I’ll get the documents. I’ll bring them over.”

‘But instead, she goes inside and locks herself away.’

David is not pleased with Nicola’s actions, but Nicola soon has other things on her mind, as she overhears a bunch of girls laughing outside her home and assumes that they’re the same girls who attacked her – and things escalate quite dramatically from here.

‘She’s basically having a complete crisis attack,’ added the soap star. ‘It starts as a panic attack, because, again, she starts to flashback to what happened with the girls.

Nicola lashes out and attacks whoever it is that’s on her doorstep (Picture: ITV)

‘Obviously, she doesn’t realise that it’s not the girl she thinks it is. One of the girls had come to the door, when she hears some girls laughing in the street. And she just goes into full attack mode.’

Yes, Nicola lashes out, attacking whoever it is that’s on her doorstep.

‘Also, at this point as well, Carl, who’s knowing something is wrong with her, has run out to call Laurel to help.’

Some of Britain’s earliest humans apparently settled in Canterbury

‘I’m desperate – it’s impossible’: The parents struggling with no childcare options for their disabled kids this summer