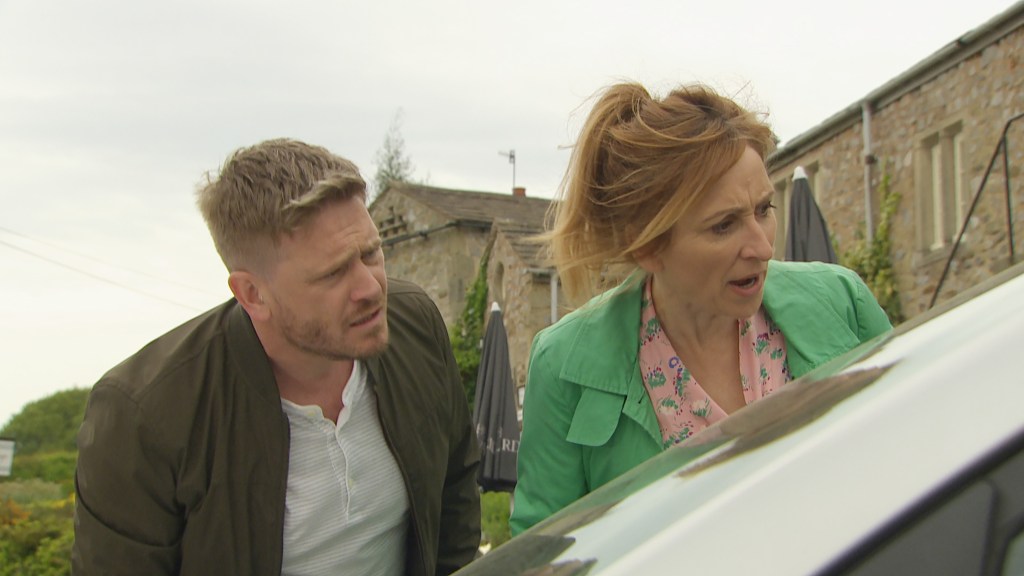 David gets an idea after a terrifying event occurs for Nicola (Picture: ITV)

Following the terrifying incident when she was beaten up, Nicola is left traumatised and too scared to leave the house. But she’s forced to go out when she realises she’s the only one available to pick the kids up from school. As she starts the car to get them she’s overwhelmed by panic and accidentally slams on the accelerator, crashing the car into David’s van.

A shaken David demands her insurance details, but Nicola is overwhelmed by the whole situation and rushes back into the house, bolting the door.

Who is shot in terrifying EastEnders gun siege?

As Nicola’s mental health spirals, David comes up with a plan. He decides to pretend to have a neck injury to try to get a bigger payment from Nicola’s insurance company. Victoria (Isabel Hodgins) is coming up with more and more elaborate wedding plans and he’s desperate to find a way to fix his finances without Victoria finding out how much trouble he’s in.

Brenda (Lesley Dunlop) realises what he’s up to and calls him out on his behaviour, telling him that Nicola is struggling and he’s wrong to take advantage of that. Will David realise that Brenda is right? Or is he so desperate for money that he’ll do anything?

When did George Michael die and how to watch the new Freedom Uncut documentary?