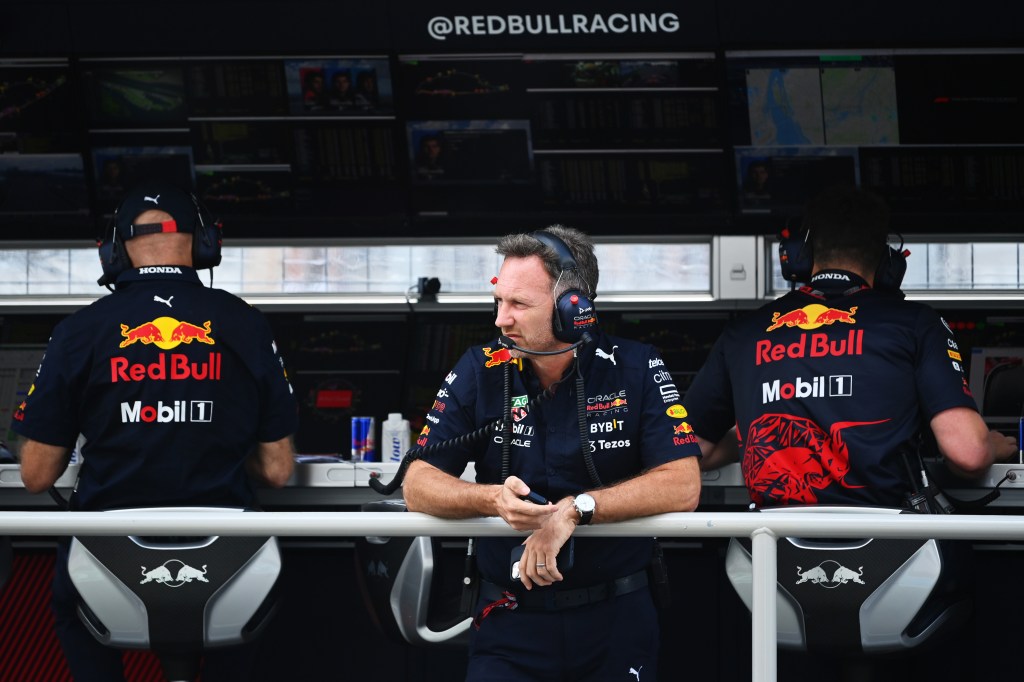 Christian Horner has overseen six consecutive wins for Red Bull, but is unhappy with what he calls ‘bias’ towards Mercedes. (Photo by Dan Mullan/Getty Images)

Red Bull team principal Christian Horner has claimed that the FIA’s technical directive on porpoising in Formula 1 is ‘overtly biased’ towards rivals Mercedes.

The motorsport governing body stepped in last week after drivers from some teams spoke out about the painful injuries they were suffering during F1 races, caused by porpoising. Seven-time world champion Lewis Hamilton in particular struggled to exit his car at the end of the Azerbaijan Grand Prix because of the level of back pain he was suffering.

Porpoising is the name given to aerodynamic quirk which causes cars to bounce wildly at high speeds, subsequently sending high loads through drivers’ bodied and causing their heads to ricochet violently in the cockpit. The issue is new for 2022 and has been caused by F1’s return to ground effect aerodynamics for the first time since the 1980s, coming as a result of air being pushed rapidly back and forth under the floor of the car.

The Mercedes team has suffered from porpoising worse than any other so far in 2022, but drivers from other outfits including Pierre Gasly, Daniel Ricciardo and Carlos Sainz demanded immediate action after the Baku race.

For the Canadian Grand Prix, the FIA stepped in and published a new technical directive instructing teams to keep bouncing within a specified limit. Despite that potentially compromising teams which suffer most from bouncing, Horner has been left livid that a change has been made mid-season, even on health and safety grounds.

‘The [porpoising] issue with Mercedes is more severe than any other car,’ said Horner. ‘That surely is down to the team, that’s within their control to deal with that. It’s not affecting others. I know they’ve said that other drivers have been complaining, [but] our drivers have never complained ever about porpoising. Certainly, we haven’t had an issue with bouncing.’

‘You can’t just suddenly change technical regulations halfway through a season. If a car is dangerous, a team shouldn’t field it. It has that choice. Or the FIA if they feel an individual car is dangerous they always have a black flag at their disposal.’

Horner further claimed that the technical directive was evidence of bias towards Mercedes from the FIA.

That is overtly biased to sorting one team’s problems out, which were the only team that turned up [in Canada] with it even in advance of the [technical directive]. So, work that one out.’

The 2022 F1 campaign will continue with the British Grand Prix at Silverstone on the weekend of 1-3 July.