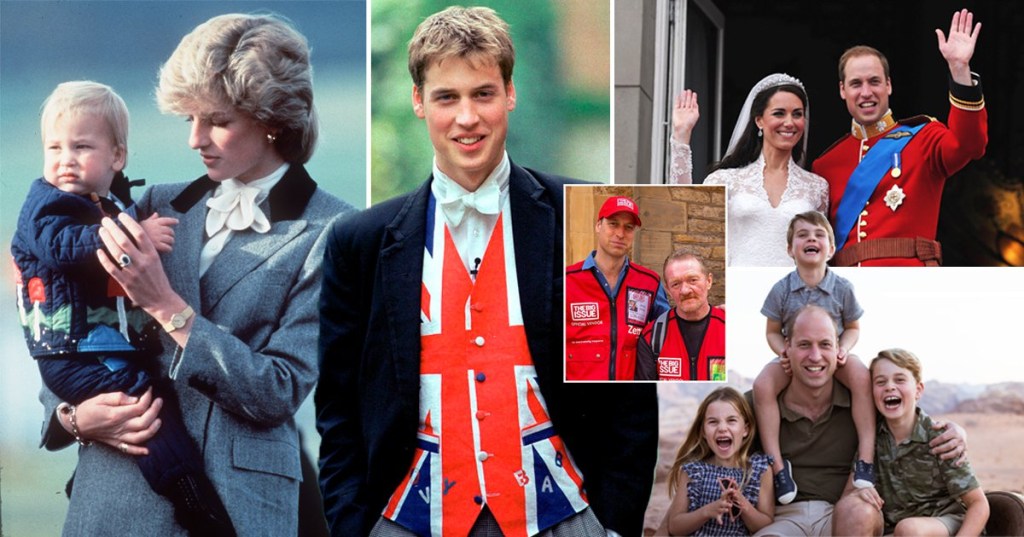 William is expected to celebrate his birthday privately (Picture: PA/Getty/AP/Reuters)

A touching series of photos have been released to celebrate Prince William’s 40th birthday today.

For his big milestone, the Duke of Cambridge is pictured through the years – from a newborn in Princess Diana’s arms to his role as a dad of three, husband and future king.

The images shared by Kensington Palace perhaps give a hint to what his reign would look like and the issues he truly cares about.

Taken shortly after the Queen’s Platinum Jubilee, William is seen selling The Big Issue on the streets of London – a far cry from the traditional royal photoshoot.

He gets busy interacting with the public to raise the issue of homelessness, something his late mum was determined to shine a light on.

Wearing jeans and a shirt, he was accompanied by veteran seller Dave Martin who showed him the ropes.

‘So, for my part, I commit to continue doing what I can to shine a spotlight on this solvable issue not just today, but in the months and years to come,’ the duke wrote in the magazine.

‘And in the years ahead, I hope to bring George, Charlotte and Louis to see the fantastic organisations doing inspiring work to support those most in need – just as my mother did for me.’

As the second in line to the throne, William is always under the spotlight while he awaits his eventual accession.

This is what the 40 archive pictures show – his lifelong preparation for a central role in the Royal Family.

Stock Market: Suez Canal Update! Floating!
Unless you are my child, don’t call me ‘Mum’ – I have a name