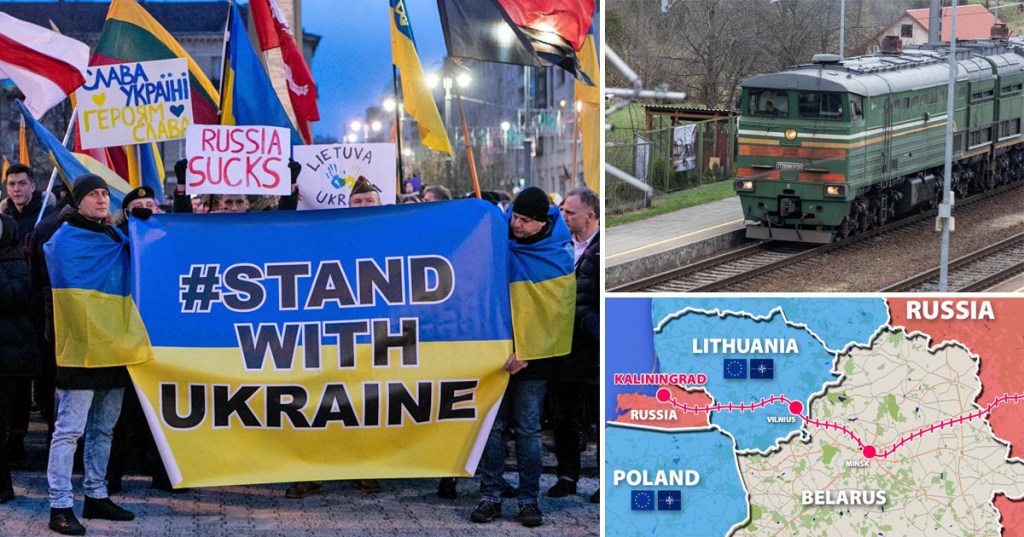 Moscow has threatened Lithuania with military action after it blocked EU-sanctioned goods from reaching the Russian exclave of Kaliningrad.

Lithuania has defended its decision to prevent sanctioned items including steel, from reaching the Russian Baltic Sea territory, which is home to some 430,000 people.

The Kaliningrad exclave has land borders with Lithuania and Poland and is isolated from the rest of Russia.

Goods normally reach Kaliningrad by rail via Belarus and Lithuania, there are no transport routes through Poland.

Russia is still able to supply Kaliningrad by sea, without falling foul of EU sanctions but has demanded Lithuania lift its ban, warning that if transport links are not restored in full ‘Russia reserves the right to take action in defence of its national interests’.

Lithuania is a Nato member state and any attack on it would be seen as an attack on the alliance.

‘This decision, indeed unprecedented, is a violation of everything and then some,’ he told reporters on Monday.

This map shows Kaliningrad sandwiched between Poland and Lithuania which are both EU/NATO nations (Picture: Metro.co.uk)

‘We understand that it is connected to the relevant decision of the European Union to extend the sanctions to transit (of goods).

‘This we also consider unlawful.’

The Foreign Ministry summoned Lithuania’s chief diplomatic representative in Moscow for a formal protest and alleged the Baltic nation was acting in breach of international agreements.

Lithuania has not had an ambassador in Moscow since April, when it downgraded diplomatic ties in protest at the killing of civilians in Ukraine by Russian troops after the February 24 invasion.

Lithuania later summoned the Russian envoy in Vilnius to tell him the ban was in line with EU sanctions, and that there was no blockade of Kaliningrad.

The EU’s top diplomat, Josep Borrell, said Lithuania’s move should not be compared to the situation in Ukraine.

Ukrainian foreign minister Dmytro Kuleba tweeted: ‘Russia has no right to threaten Lithuania. Moscow has only itself to blame for the consequences of its unprovoked and unjustified invasion of Ukraine.’

On Monday, Lithuanian customs said the sanctions, which took effect in mid-June, were part of the fourth EU sanctions package imposed on March 15.

Lina Laurinaityte Grigiene, a customs spokeswoman, said affected items include Russian steel ‘that cannot be transported over the territory of European countries’.

‘The land transit between Kaliningrad and other parts of Russia is not stopped or blocked. All goods that are not under sanctions travel freely,’ she said.

She added that …read more

Stock Market: Suez Canal Update! Floating!
How to watch EastEnders box sets and when is it on TV?