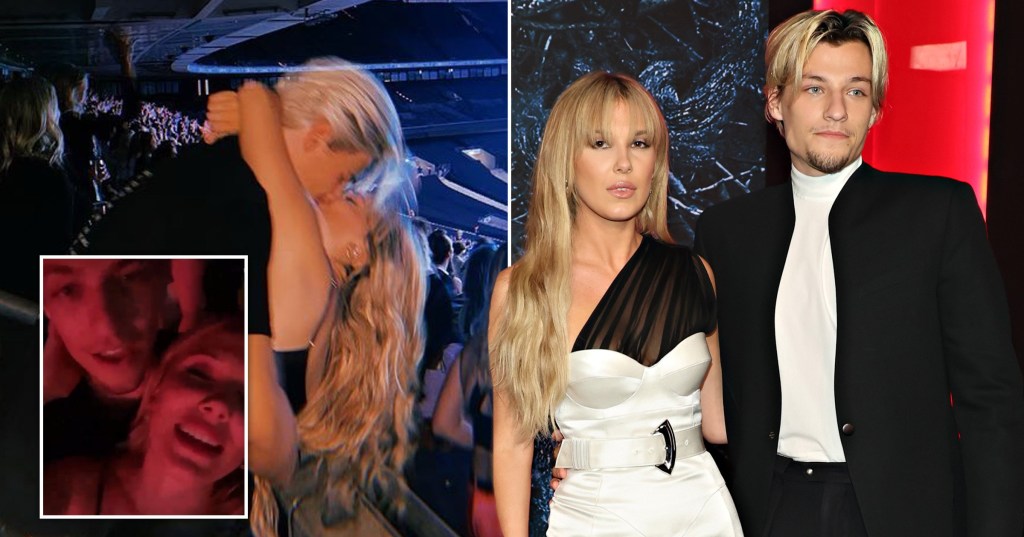 Millie and Jake have been dating for over a year (Picture: Getty/Instagram/milliebobbybrown)

Millie Bobby Brown and her boyfriend Jake Bongiovi were the epitome of young love at Harry Styles’ Wembley concert on Sunday.

In fact, the young couple seemed perhaps more invested in each other than the main man himself up on stage as they passionately made out while enjoying his set.

Sharing a photo of their kiss, which saw Stranger Things star Millie throw her arms around Jake – son of rock royalty Jon Bon Jovi – as he leaned over her for a smooch at the front of their box, with their matching blonde heads together.

‘Alexa play love of my life by harry styles,’ 18-year-old Millie captioned the post, swooning over her 20-year-old boyfriend.

The pair then showed their appreciation for said track, Love of My Life, off the singer’s new album Harry’s House, as Millie shared a short clip of her and Jake swaying as they sang along enthusiastically to camera.

Millie and Jake have been dating for over a year, with the actress first introducing him to her Instagram followers in June 2021, before going ‘Instagram official’ in November with a snap of Jake kissing her while on the London Eye.

Harry has certainly been delivering to fans during his Wembley gigs

Since then, they have made their red carpet debut as a couple at the Baftas and the Syracuse University student also accompanied her to the Stranger Things season four premiere.

Millie’s co-star Noah Schnapp was also with the couple for Harry’s gig, with the Enola Holmes star sharing a snap of him in a pink cowboy hat, seemingly emotional, as she branded him a ‘big Harry fan’.

Noah and Jake were getting on like a house on fire (Picture: Instagram/noahschnapp)

Noah posted a picture of himself posing with Jake and a pink feather boa to Instagram, while Jake’s photos showed off more of their swanky hospitality box.

Former One Direction star Harry, 28, also helped a fan come out to the entire stadium during the show, with the singer congratulating Matteo from Italy on being a ‘free man’.

Meanwhile, it’s been rumoured that Millie is in talks with Disney for a part in an upcoming Star Wars project that could net her a pay day of around $15m (£12.2m).