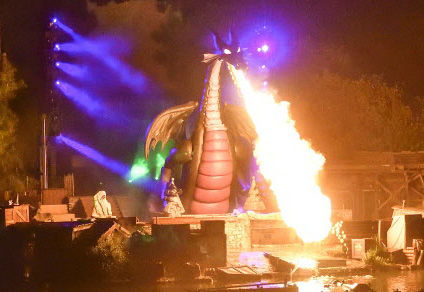 Disneyland used the downtime during the two-year pandemic pause of “World of Color” and “Fantasmic” to refurbish and update the hundreds of technological elements and special effects of the nighttime spectaculars that are often submerged under water.

Disney Live Entertainment show director and writer Wendy Ruth and producer Jennifer Magill spoke about the refurbishment process for the nighttime spectaculars that saw “Fantasmic” at Disneyland and “World of Color” at Disney California Adventure return just as visitors remembered them during a round table media panel about the Anaheim theme park’s returning entertainment lineup.

“We had a lot to restore,” Ruth said. “We were down for some time. It took time to put a lot of things back together, especially as they’ve been sitting in the water.”

Sign up for our Park Life newsletter and find out what’s new and interesting every week at Southern California’s theme parks. Subscribe here.

SEE ALSO: 7 tips for watching the return of ‘Fantasmic’ at Disneyland

Disneyland crews traded out some “World of Color” equipment that had reached the end of its life and parts were no longer available for repair.

“The new equipment we installed is similar to the original, but because technology is always improving, ‘World of Color’ looks even more brilliant than it did in 2020,” Magill said. “The lights on the Incredicoaster are significantly brighter than before. Plus, our new 4K projectors are much brighter and crisper than the previous ones.”

Disneyland brought back the “World of Color” and “Fantasmic” water shows this spring as part of an entertainment package of nighttime spectaculars after two years away because of the COVID-19 pandemic.

“World of Color” is a technological wonder featuring high-definition projections on mist screens and 1,200 synchronized water fountains in addition to lighting, laser, fire and fog effects on Paradise Bay at Disney California Adventure.

“Fantasmic” — the 30-year-old predecessor to “World of Color” — has all that plus fireworks, a massive audio-animatronic Maleficent dragon and a host of Disney characters performing on the Tom Sawyer Island stage and aboard a fleet of watercraft on the Rivers of America at Disneyland.

Adding to the complexity of both shows: Much of the technology is submerged under water.

“We have maintenance teams that come in on a regular basis every day for those shows,” Ruth said. “What it took was getting back in there and finding out what we needed to do.”

The 412-day pandemic closure of Disneyland and DCA gave crews unfettered 24-hour access to the Rivers of America and Paradise Bay — the artificial waterways that serve as aquatic stages for the twin nighttime spectaculars.

You’ll be charged to visit Europe from 2023

Does creativity increase with age or diminish? Let’s take a closer look