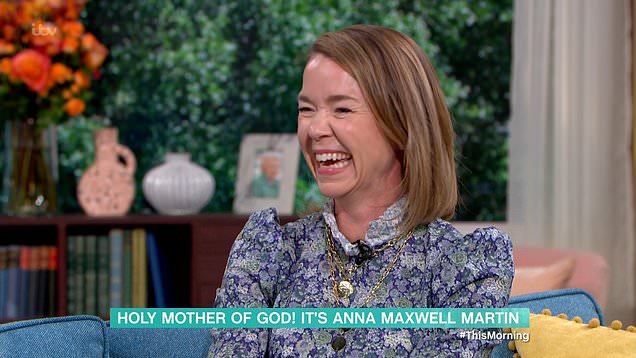 Anna Maxwell Martin has delighted people across the country with three series of Motherland – but her children aren’t convinced.

The 45-year-old actress – who has played Julia on the beloved sitcom since 2017 – admitted her two daughters don’t enjoy watching the hit show because they find her role ’embarrassing’.

Appearing on Monday’s episode of This Morning, she said: ‘Motherland, they hate! Line of Duty… no, they’re not interested to any of it. They particularly hate Motherland because they can’t bare me embarrassing myself so much.’

Anna also reflected on the rise in popularity for the comedy, which rose during lockdown as more and more people discovered the show.

‘I feel that Bafta [for best scripted comedy last month] was a “momentum Bafta” for the three seasons that have gone before. After lockdown, people were really accosting me all the time about Motherland. So many people watched it,’ she added.

‘It’s just a really silly programme. I really love Derry Girls, I’ve just finished that – and it’s so daft, isn’t it? I think we love that. Motherland at its best is that, when they’re kids, aren’t they?’

However, Anna – who has daughters Maggie and Nancy with her late ex-husband Roger Mitchell – revealed her appearance on This Morning definitely captured at least one child’s attention, particularly given she would be meeting Phillip Schofield.

She said: Actually I have to say Phil, my daughter [Nancy] said to say hello to you! I don’t know why not to you Holly, but she said, “Are you seeing Phil today?” I went, “Yeah.” She went, “Say hello from me.” Do you know her?’

Also during the interview, Phil pitched the idea of a Line of Duty spin-off focused on Anna’s character DCS Patricia Carmichael, and she joked he should try to convince the bosses.

She quipped: ‘Can you say that right down the lens to Jed Mercurio? Or to the BBC commissioner?’

Jokingly suggesting the show could be called Tart With A Heart, she insisted she ‘wouldn’t know’ if a new series is being planned, and laughed: ‘I’d have to see about the money!’

This Morning airs weekdays at 10am on ITV.