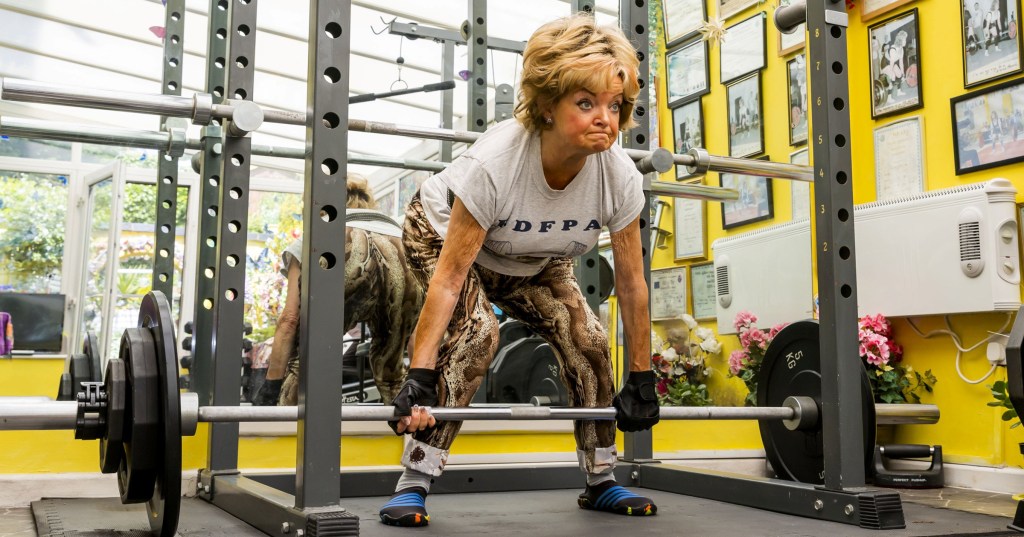 Pat has escaped death three times and defied the odds by still pumping iron at the age of 76.

Pat took up the sport in 1982 when she was 36 after receiving her first terminal diagnosis due to a brain tumour.

Soon she was smashing records and winning competitions.

The grandmother-of-two swapped to a plant-based diet and began running marathons and bodybuilding in the hope it would stop her slow-growing tumour.

For 10 years she travelled the world competing in national and global events – deadlifting 135kg at a bodyweight of 42kg in her heyday.

But at 48, she faced another terminal cancer diagnosis – this time told she had osteosarcoma, a type of bone cancer, in December 1993.

Pat continued with her healthy and active lifestyle in a bid to shrink the 14 tumours.

But her run of bad luck wasn’t over – in September 2018 she was involved in a high-speed crash that killed her driver and the driver of the other vehicle on Germany’s Autobahn.

The accident left Pat with crushed lungs and led to pulmonary fibrosis – a lung disease that occurs when lung tissue become damaged and scarred.

In 2019 she was told she only had three months to live.

Once again, she defied the odds and is still pumping iron. She’s also just lifted 60.5kg in March 2022 – a new BDFPA and WDFPF record for her age and weight category.

Pat, a nutritionist and author of A Living Miracle, from Kingswinford, West Midlands, said: ‘As soon as I got sick it sparked a competitive side of me and I fell in love with powerlifting.

‘When my coach first mentioned it, I thought he must be crazy when he told me how much these tiny girls were lifting.

‘My cancer diagnosis gave me this new way of living and thinking.

‘I travelled the world competing and smashing records.

‘I can’t think of a world where I am not powerlifting.’

Pat refuses to stop and has been researching ways to extend her life for years.

She researched non-conventional therapies, became a nutritionist and started working in a hospital in Detroit, USA, and at different clinics in Germany, helping cancer patients.

‘I was never in one place for very long due to my workload,’ Pat said.

‘I would jet off all over the place for my powerlifting events and to Germany for the clinics.

‘I had such a big thrill at every event and when I did well.’

Pat has broken around 200 records and can lift …read more

World’s largest ever container ship docks in the UK