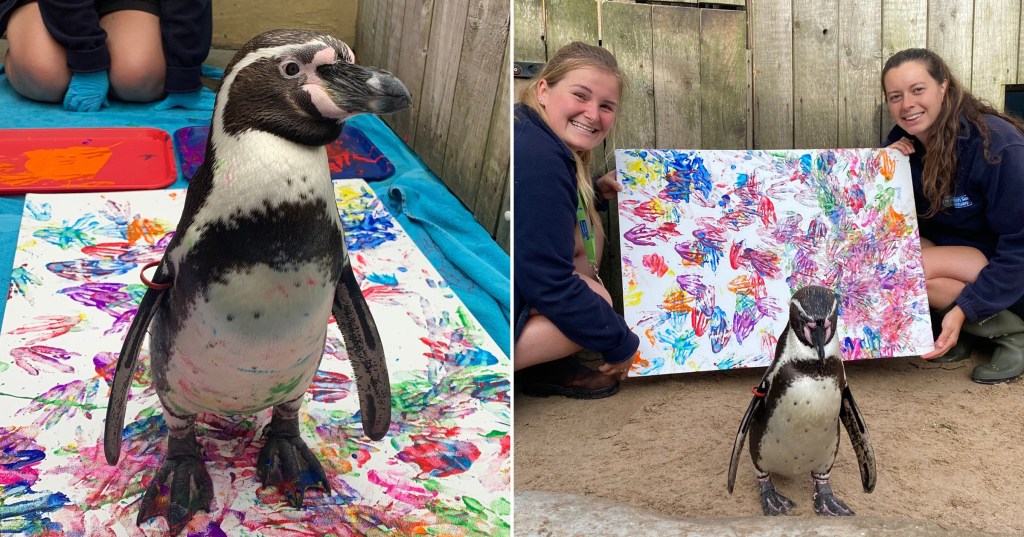 When people think of artists they tend to think of the grand works of Leonardo Da Vinci, Vincent van Gogh or Pablo Picasso.

But one Cornish penguin pushing all the conventional boundaries is Squidge, whose ‘chaotic’ paintings are taking the art world by storm.

Squidge lives at the Cornish Seal Sanctuary in Gweek, near Helston in Cornwall, and as part of efforts to secure his future home, the cute little penguin has created a stunning rendition of colourful penguin footprints.

Being an artist is just part of Squidge’s daily enrichment activities with the animal care team which encourages him to remain active and engaged as well as encouraging him to exhibit natural behaviours.

Squidge’s artwork is even expected to raise £1.3 million at auction as part of the sanctuary’s Fund Our Future campaign which will go towards four new pools at the sanctuary and his brand new home.

The Humboldt penguin has lived a life of hardship though.

He was born at the sanctuary four years ago, and his parents Gilbert and Lola still live on site but they were unable to care for him.

This means Squidge has always had a special bond with the sanctuary team, who hand-reared him since he was very little.

Squidge has produced the artwork to secure his brand new home (Picture: Cornwall Live /BPM Media)
Squidge is the next big name to hit the art world by storm (Picture: Cornish Seal Sanctuary)

‘Painting with Squidge is a voluntary activity and just one way we boost his stimulation as part of his regular care routine – and the results are pretty spectacular.

‘If you’ve never seen art by a penguin before, it’s just as beautiful and chaotic as it sounds, and it absolutely captures Squidge’s cheeky personality.’

Squidge is known on site for his cheeky and fun personality and always delights visitors to the sanctuary.

Members of the team claimed they always knew Squidge had it in him to be a creative genius and now he really has shown his true colours.

‘They say creativity takes courage, and we’ve loved seeing Squidge embrace this new side of himself.’

The A1 (60cm x 84cm) canvas has Squidge’s official stamp for authenticity and is now available to bid on.

The money will go towards building state-of-the-art pools at the sanctuary, securing the charity’s future while putting animal welfare at the centre of everything they do.

All painting sessions have passed welfare checks and have been fully approved by the sanctuary’s veterinary specialists, with paint used certified as pet and …read more