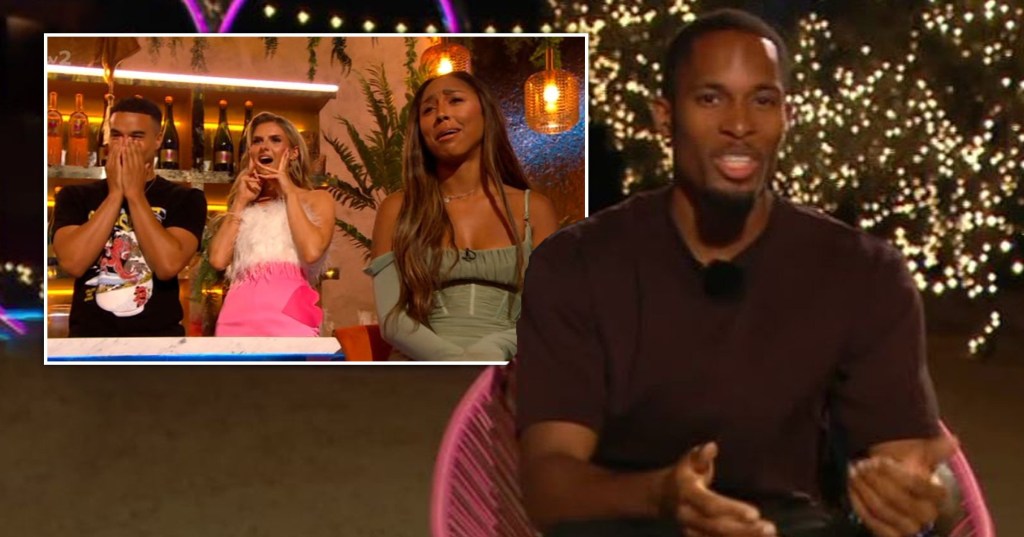 Remi Lambert rapped on Love Island: Aftersun despite having been just dumped from the villa, leading to a dramatic reaction from former contestants Toby and Chloe (Picture: ITV 2 )

Love Island: Aftersun had viewers in bits on Sunday night as they brought back one of the highlights from the series so far.

Two weeks into Love Island 2022, audiences have been treated to explosive drama, awkward dates, dramatic recouplings and – in the form of Remi Lambert – rapping.

In a previous episode, Remi had rapped to his fellow contestants around the firepit (while forgetting the words just a bit), resulting in a slightly awkward silence and a side-eye between Luca and Jacques.

But while the performance wasn’t mind-blowing (to say the least) the star had still been met with a round of applause from his fellow Islanders.

On Sunday, the rapper was booted from the villa in a shock recoupling, and landed on Love Island: Aftersun to have his final say before heading home.

Of course, being kicked out of a competition with a potential £50,000 prize would likely not leave you in the mood for performing… but they asked Remi to rap anyway.

Remi dutifully gave it a go but his heart clearly wasn’t in it (Picture: ITV)

And to his credit, he did – but his heart clearly wasn’t in it, and he forgot his words again.

The segment resulted in fairly awkward viewing, with many fans catching on to the reactions of fellow former contestants Chloe Burrows and Toby Aromolaran, who looked to be visibly cringing as the Manchester-born reality star gave it a go.

Fans flocked to social media to comment on the moment, with one person sharing a reaction image with the caption: ‘They got Remi to do a rap on after sun… and he forgot his bars again.’

Chloe and Toby’s reactions were instantly picked up by fans (Picture: ITV)

‘Chloe and Toby’s face when Remi rapped,’ one fan laughed, while another more excitable fan wrote: ‘IT’S TOBY’S FACE FOR ME WHEN REMI STARTS RAPPING.’

‘Remi’s gonna make a whole song about this LMAO,’ another said.

Others defended the 22-year-old, with one person saying Remi was ‘clearly hurt & embarrassed yet they want him to rap??’

Remi sat there clearly hurt & embarrassed yet they want him to rap ?? #loveisland #loveislandaftersun pic.twitter.com/jIaIo1BZdu

They got Remi to do a rap on after sunâ¦ and he forgot his bars again #LoveIsland pic.twitter.com/9wUB59PoVp

Remiâs gonna make a whole song about this …read more

Three taken to hospital after ‘chemical leak’ in Cardiff