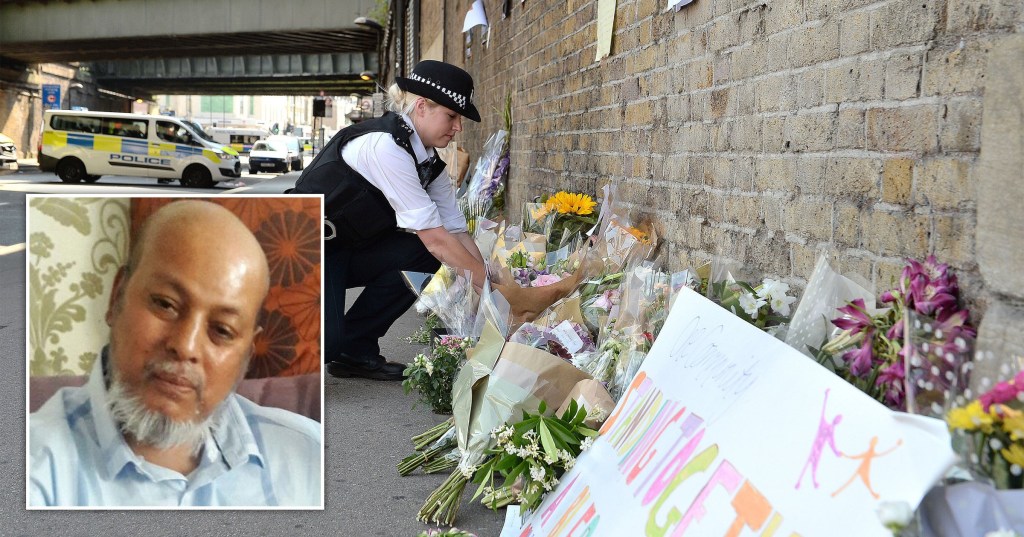 Makram Ali, 51, died at the scene after a van was driven into a crowd of Muslim worshippers (Picture: PA)

Today marks five years since a far-right extremist ploughed a van into worshippers outside a mosque in north London.

Makram Ali, 51, was killed and 12 more people were injured during the Finsbury Park terror attack that took place at the Muslim Welfare House mosque and community centre after the night time Ramadan prayers in 2017.

Mr Ali’s daughter, Ruzina Akhtar, was one of the mourners who gathered in Finsbury Park Mosque this afternoon for a special service honouring his life.

She remembered her dad as ‘one of the most gentle human beings you could have met’.

Fighting back tears, Ms Akhtar told the crowd: ‘He has been tragically taken from us five years ago.

‘Our dad was first and foremost one of the most gentle human beings you could have met who always had a smile on his face and was cracking jokes at the most random of times to make others laugh.

‘He was a compassionate husband, a loving father and doting grandfather who was adored by everyone.

‘His death has left a black hole but remembering his smile and laughter we surround that hole with more love for one another, as he would have wanted.’

Ms Akhtar said that ‘as a Muslim woman’ she wanted everyone ‘to voice any Islamophobic behaviour as it still exists so it is tackled right away’.

For more than 20 years her dad had always been praying in the same place.

On the night of the attack, Mr Ali had collapsed at a bus stop nearby his home when extremist Darren Osborne, 48, rammed into him and other worshippers.

Witnesses said the driver was wrestled to the ground and then beaten until the imam of the local mosque, Mohammed Mahmoud, calmed down the crowd and appealed for him to be handed over to the police.

At the time, onlookers recall that Osborne yelled ‘I want to kill all Muslims’.

Today’s memorial also saw Toufik Kacimi, chief executive of the Muslim Welfare House, pay tribute to Mr Ali and call for the ‘root cause of Islamophobia to be tackled’.

‘This incident was trying to divide us but it actually brought us together – as you can see, five years on we’re still coming together today,’ he said.

‘British Muslims still think that Islam is not compatible with Europe. We have to tell them, educate them, that Islam is part of the fabric of this society …read more

Ikea launches a catalogue of baby names inspired by its furniture