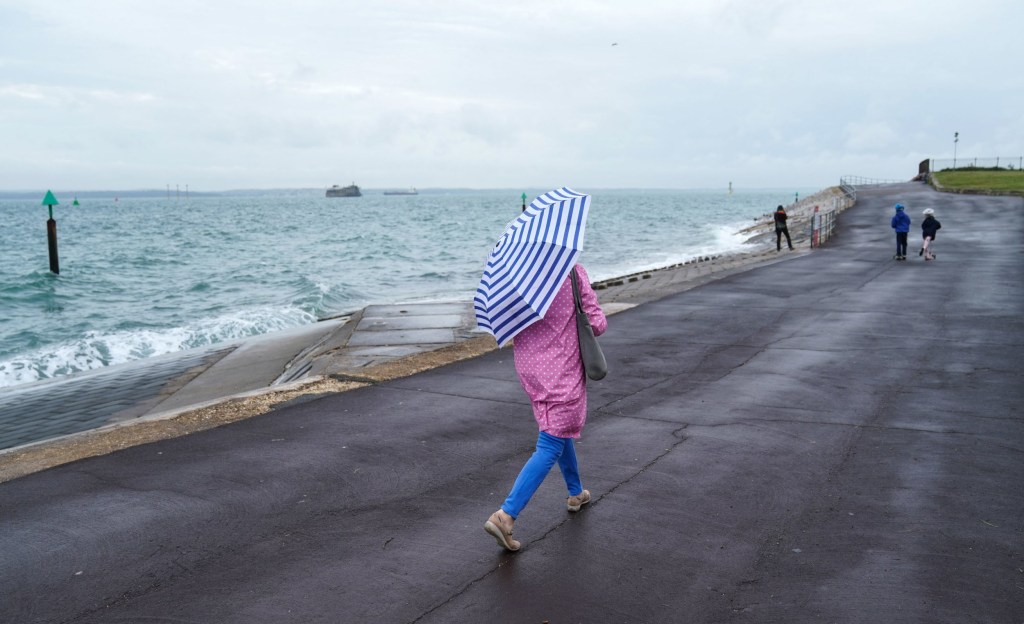 A yellow weather warning has been issued for parts of southwestern England and Wales (Picture: PA)

Brits are set to be hit with heavy thunderstorms after one of the hottest days of the year so far yesterday.

Despite Saturday’s roasting temperatures hitting a high of 23.6C, a yellow weather warning of storms has been issued for parts of southwestern England and Wales, which will last until 5am tomorrow.

According to the Met Office, the sudden change may cause flooding of homes and businesses tonight across London, Oxford, Plymouth, Brighton and Cardiff.

There is a chance of delays and some cancellations to train and bus services, and driving becoming ‘treacherous’.

There are also warnings of power cuts if the thunderstorm becomes too violent.

It comes after most of the country basked in glorious sunshine just 12 hours ago.

It was another warm day for the UK, with maximum temperatures just shy of the #WarmestDayOfTheYear so far (23.6C at Faversham on the 6th May).

Here is a look back at the past 24 hours ð pic.twitter.com/owlPsaTM4a

London, Oxford and Cardiff are some of the areas that will see the most drastic change in weather (Picture: Met Office)
The national agency also warned of possible power cuts (Picture: PA)

Simon Partridge, from the Met Office, told The Mirror: ‘Further north will be drier and with clear skies it will feel much fresher here away from the muggy air down across southern counties.

‘And that’s how we really start off on Sunday morning, grey with some outbreaks of rain in the south.

‘A few showers just making their way into the south western parts of Scotland.

‘But during the day, the sun will come out, the cloud will break and that will allow temperatures to climb once again.

‘And down in the southeast, we could see highs of 25°C and that will be the hottest day of the year so far.

‘But with that warm and muggy air, we will then see further showers start to push in from the south once again through the overnight period.

‘And again, we will see a risk of thunder for many southern parts of the country.’

A few spells of sunshine are also on the cards for Monday and temperatures will remain high, predicted to hit 25°C in some areas – which would be the hottest day of the year.