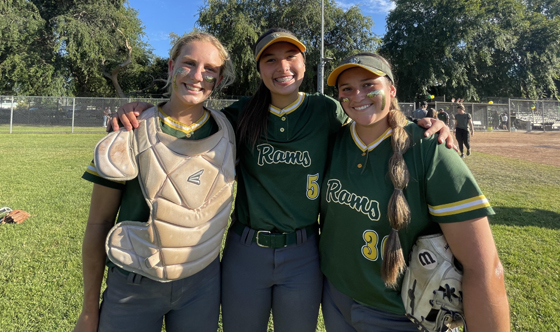 BURBANK — The Temple City softball team had not given up a run in the playoffs on its way to the CIF Southern Section Division 4 semifinals, and it was hoping to keep that trend going against Burroughs on Saturday.

With a spot in the championship game on the line, the No. 3-seeded Rams traveled to Valley Park in Burbank to face the No. 7-ranked Bears, well-aware that the hosts knocked off the division’s No. 2 seed, Yorba Linda, to set up the semifinal matchup.

Temple City was ready and well-prepared, and battled to a 7-2 win over Burroughs to advance to the Division 4 title game.

The Rams will face the winner of Tuesday’s semifinal, Moorpark vs. Heritage Christian, in the championship game at Bill Barber Park in Irvine on May 20 or 21.

“It’s a great accomplishment,” Temple City coach Eric Arreola said. “I told them to go home, sleep in, enjoy it, and be proud of it.

“But when we step on the dirt on Monday for practice, it means nothing. We didn’t come all this way for second place.”

The Rams (23-6 overall, Rio Hondo League champions) had outscored their first three playoff opponents 17-0 behind stellar pitching from sophomore Kassandra Gewecke, but the Bears found a way to break through the Temple City defense to end their defensive hot streak.

“I thought we hit her well, but I thought we could have used a few more timely hits,” said Burroughs coach Doug Nichols, whose team faced Temple City last year in the first round of the Division 4 playoffs. “We got 11 hits off her and scored two runs, and we could’ve got a few more.”

The 90-degree weather didn’t bother Gewecke, who was pitching for the third straight game in the playoffs.

“My dad says we Geweckes thrive in the heat,” she said.

She pitched a complete game, struck out nine batters, walked four and gave up 11 hits. The sophomore also finished 2 for 4 at the plate with an RBI.

“We’ve been working hard for this, and we didn’t come this far not to take it,” she said.

Gewecke was emotional after the victory. Her uncle recently passed away and the team drove by the place where his memorial service took place. She’s dedicating the rest of the postseason to him.

The Rams benefited from the work done by sophomore Samantha Womack and senior Mikala Sanchez on offense.

“The momentum is big in this game — it carries,” said Womack, who finished 3 for 4 with an RBI, three runs scored, two singles and a home run. “Once we get that momentum going, the next person can come up (with confidence).”

Temple City added two more runs in the third inning to go ahead 4-0, aided by a thunderous triple from Rams sophomore Melanie Platon.

When should you water your lawn? Utah Division of Water Resources gives weekly guide

Will the tanking stock market doom President Biden and the Democrats?

BeachLife Festival 2022: Weezer, 311 bring day one of the three-day fest to a rockin’ close