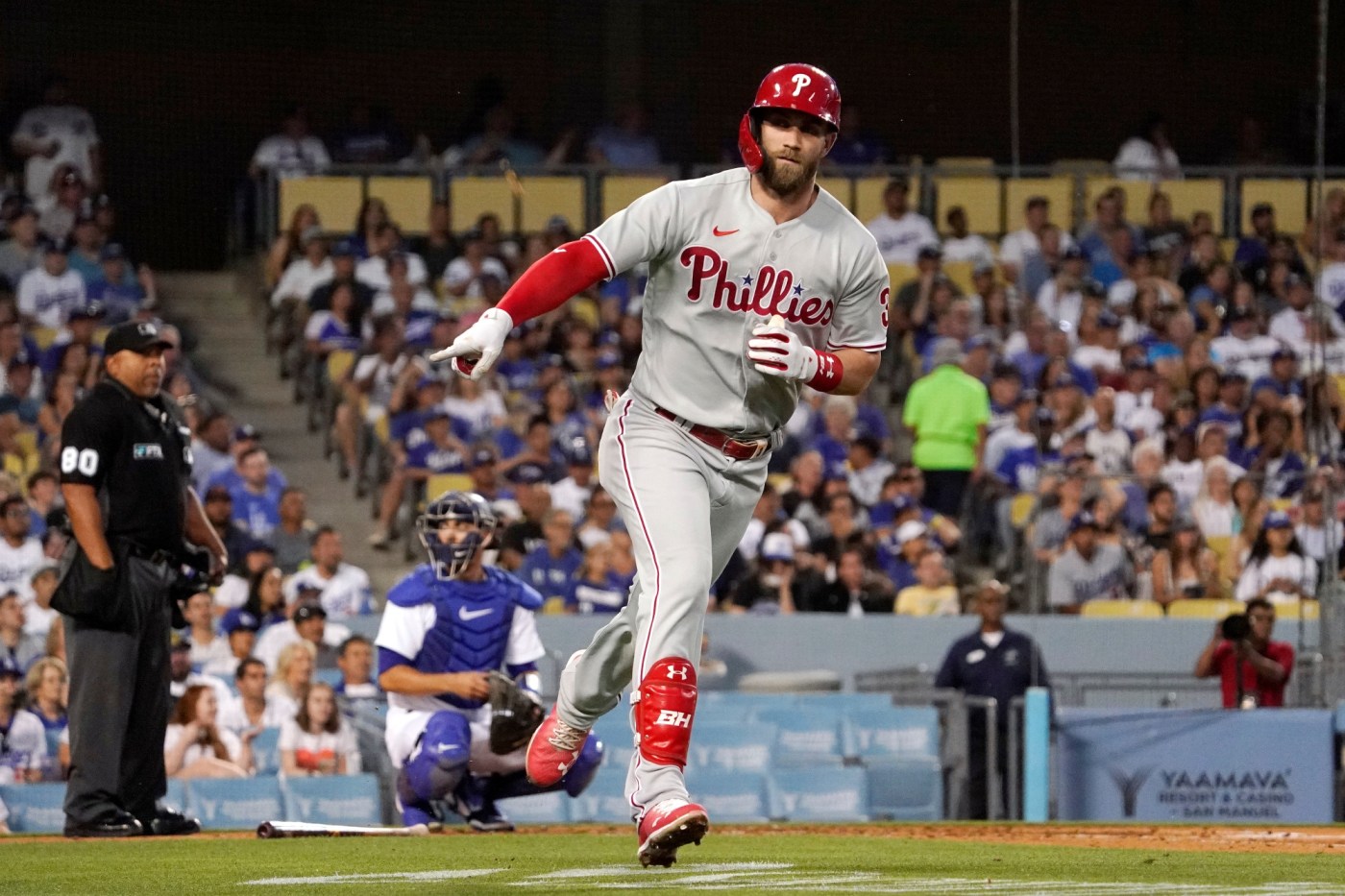 LOS ANGELES ― The dog days of summer are, by definition, five weeks away. Consider Saturday’s “Pups at the Park” promotion on a hot night at Dodger Stadium a sneak preview, then.

If the baseballs continue to fly as they have since the Dodgers returned home from the East Coast, the low-scoring run environment of the season’s early weeks will soon be in the past. The Dodgers’ grip on first place might follow.

Julio Urías became the Dodgers’ latest pitcher to have no answer for Bryce Harper and the Philadelphia Phillies. Harper hit one of five home runs ― four by Philadelphia ― in the Dodgers’ 8-3 loss before an announced crowd of 50,279.

The Dodgers (20-12) have lost four straight games for the first time since June of last year. Unlike the first three defeats, there was no late-inning comeback in store Saturday. Cody Bellinger drove in a pair of runs with a double in the fourth inning and the Dodgers did not collect another hit.

Mookie Betts hit a home run in the first inning against Ranger Suarez (4-1), who allowed five hits and three runs in seven innings. He issued one walk and struck out six.

Like Tyler Anderson and Walker Buehler before him in the series, Urías struggled to keep Harper off base. The Dodgers’ longtime nemesis went 3 for 4 (a double, a homer, a bunt single) and three RBIs. He’s 8 for 12 with a home run in each game of the series.

Jean Segura, Kyle Schwarber and Rhys Hoskins also hit home runs against Urías (2-3). The left-hander had never allowed four homers, six extra-base hits, or eight runs in a game. The Phillies had all of these after four innings.

In the first, Harper poked a well-located curveball off the end of his bat into shallow left field. Because the Dodgers were shifted the opposite way, Harper was able to leg out a double.

The next batter, Nick Castellanos, hit a grounder down the third-base line. Justin Turner gloved the ball on his backhand but threw a one-hopper to first base that Freddie Freeman could not scoop out of the dirt. Castellanos was safe on the error, so the inning continued for Segura.

Segura did not make hard contact with Urías’ 1-and-1 curveball, but his fly ball found the shallowest nook of Dodger Stadium: the left field corner. At 91.0 mph per Statcast, it was the second-softest home run hit this season. Because of Turner’s error, all three runs were unearned.

The third inning was not as kind to Urías’ ERA. Rhys Hoskins singled. Alec Bohm doubled. Harper cleared the bases with his ninth home run of the season, a 420-foot parabola. Philadelphia led 6-1.

Home runs by Schwarber and Hoskins in the fourth inning extended the lead to 8-1. Urías was never in danger of being removed. No relief pitcher began warming up until Reyes Moronta in the sixth.Related Articles

Chart: How many Americans would have died from COVID if the country had your state’s death rate?