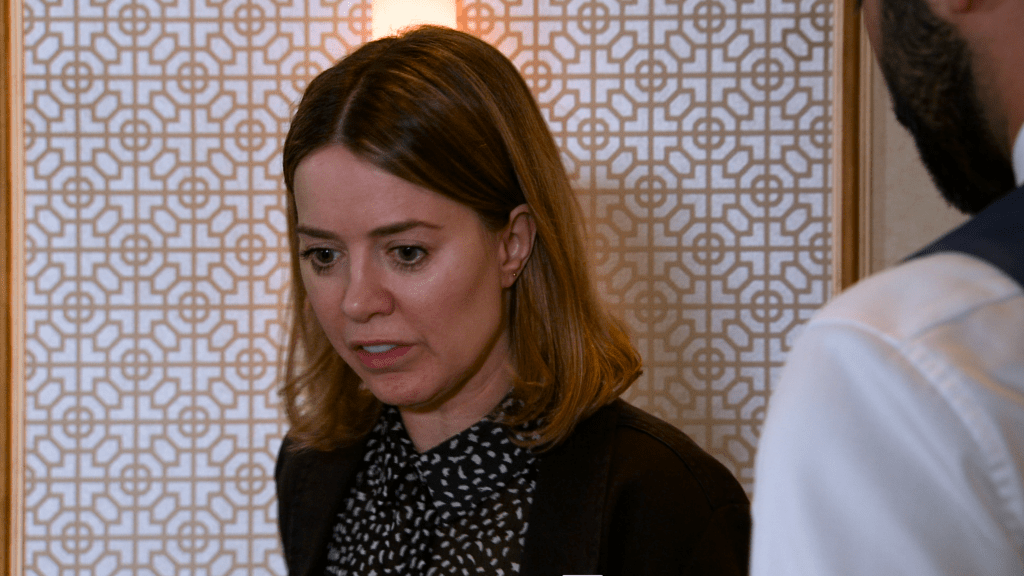 Abi, however, has an ulterior motive.

Imran is concerned when he spots Abi taking pictures, but Abi covers her tracks well, explaining that she simply wants to remember the day in question.

What is she up to?

Coronation Street’s Abi Webster (Sally Carman) is on a mission to get son Alfie back where he belongs, and thus she decides to play nice with Toyah Battersby (Georgia Taylor) and Imran Habeeb (Charlie de Melo).

The popular character, as viewers know, declined to attend Alfie’s naming day celebrations, in scenes which aired this week.

Next week, however, she has a change of heart, showing up unexpectedly, much to Imran and Toyah’s shock.

She claims that she wants to put the animosity behind them and start afresh, hoping to build a relationship with her son Alfie, with their permission.

Toyah is delighted to hear such a thing, as seen in the above clip, taken from Monday’s (May 16) edition of the ITV soap.

‘You’re welcome any time!’, Toyah exclaims. Abi asks if she can take a picture of Alfie, claiming that she wants to remember the day, and Toyah is more than co-operative.

Abi, however, has an ulterior motive.

Imran is concerned when he spots Abi taking pictures, but Abi covers her tracks well, explaining that she simply wants to remember the day in question.

What is she up to?

Subsequent scenes see Abi secretly meet up with an old contact named Matty. Handing him a couple of envelopes, she orders him to work his magic.

Matty later calls, and Abi confirms that she’s happy to wait a week – for the fake passports!

Coronation Street airs these scenes on Monday May 16 at 8pm on ITV.

The Repair Shop’s Jay Blades slept in car park for a week after suicide attempt: ‘I just wasn’t existing in that life’