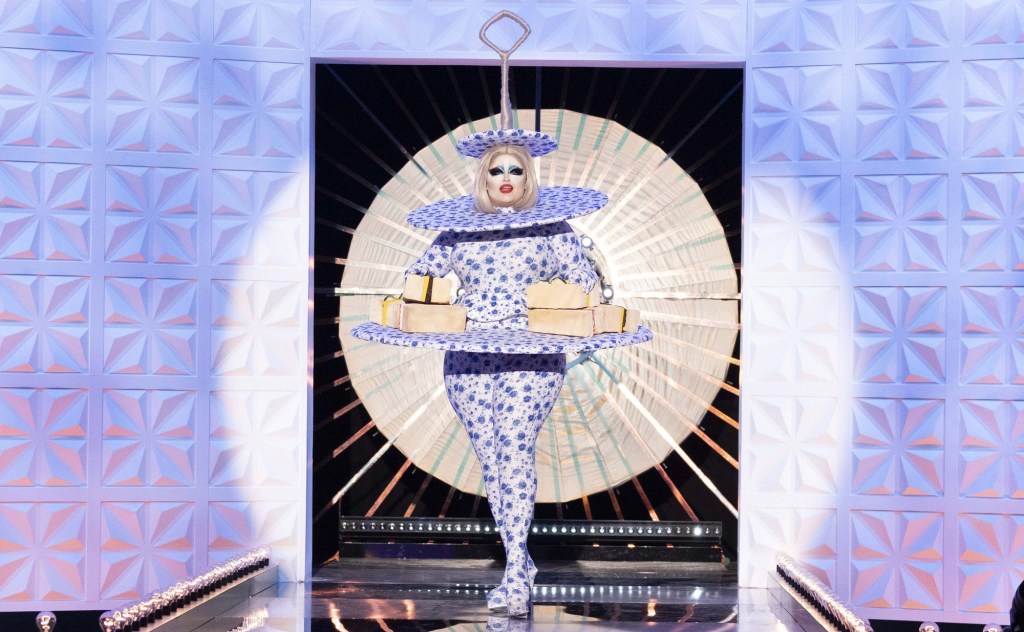 Victoria’s cake stand look in week one was a huge hit (Picture: BBC/World of Wonder/Guy Levy)

Victoria told us how the contestants were given themes for upcoming runways weeks prior to the start date, in order to give them time to prep their stunning lewks.

The Welsh drag artist and her fellow queens were told what was to come ‘before being categorically told’ they’d secured a spot on the show.’

‘I don’t know if that’s the case every year,’ she went on. ‘I don’t know if it was different for us because of Covid, we needed some time to mentally prepare before we actually could go ahead. It was about six weeks we had to prepare with sort of confirmation.’

But it was very hard not to let it slip

Divina weighed in: ‘You’ve got to get all these costumes made without telling anybody what it is that you’re doing.’

She luckily had a cover story, due to being on the BBC show All Together Now at the time, and added: ‘It wasn’t so bad for me in that respect, I had options. Whereas for some of the girls, they’d never done anything like that anyway. “Why do you suddenly need 30 different outfits? Can you explain?” “No, I can’t. But I just do!”‘

It was even more difficult in lockdown for Victoria and her fellow queens to get their runway outfits sorted: ’When it came to sourcing fabrics and getting seamstresses and designers on board when you can’t tell them what it’s for and you can’t explain the severity of the situation, why you need this outfit at a certain point in the middle of a lockdown when no one is working… you can hope that they can get on board but without categorically telling them what it’s for!

‘I was desperate for [the fact I was cast on Drag Race UK] not to get out. I didn’t want anyone to have an inkling.

‘It wasn’t even just that it was exciting for me, but [I was] obviously a [show] first and it was a big deal. It was tricky trying to get people to make things, and on time in a lockdown when Royal Mail and the parcel services were not at peak performance.’

The show is notoriously secretive, meaning there were strict rules about how the queens could socialise outside the werkroom.

‘There were a couple of Sundays where we were off but they they made sure that we weren’t altogether,’ Divina explained.

‘We were filming in London, so we could go out shopping in London, but we had to be in twos or threes. It couldn’t be all six or seven of us just in case somebody saw all of us all together. And went, “They’re in Drag Race, they would work out. But they were nice days.

Victoria urged others to trailblaze in the competition, noting drag kings’ probably don’t apply’ because they don’t think they’d be selected.

‘I thought the same thing,’ she admitted. ‘I didn’t apply for season one or two because I thought “Well, there’s no point in applying, but hopefully now they will apply and more different gendered people will apply.

‘If the producers and the casting team aren’t given the applications by us aren’t seeing the videos, how exactly are they going to cast us? We need to apply, we need to absolutely bombard them with incredibly talented, different gendered performances. Then they can’t not cast us, because we’re so amazing.’

UK ‘walking into a tsunami’ with 500,000 children in absolute poverty in a year