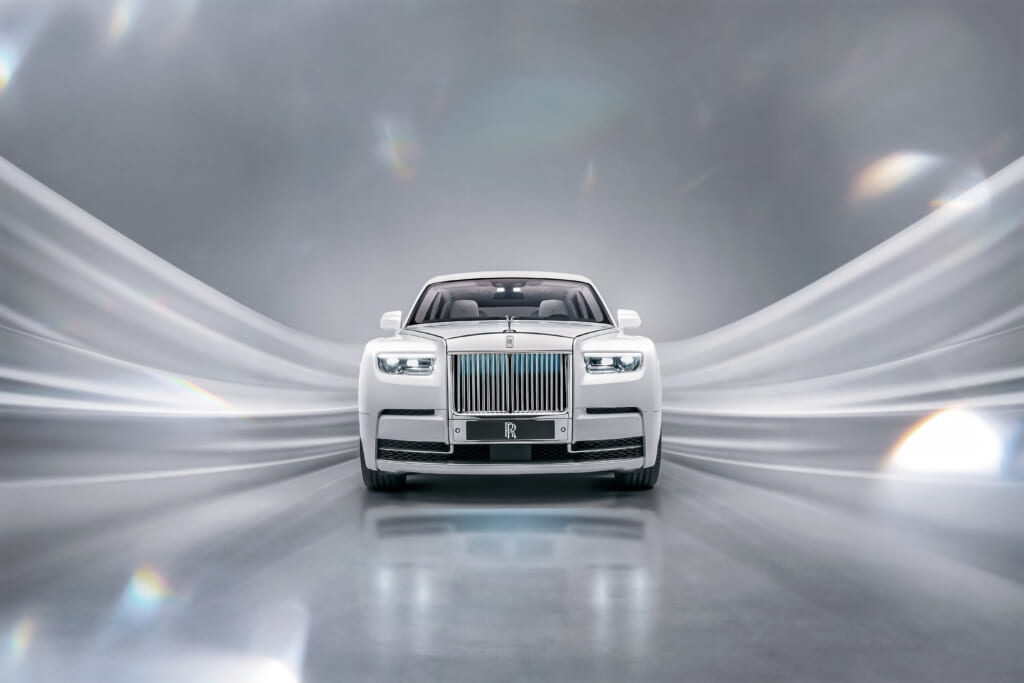 The most decadent luxobarges money can buy are in Rolls-Royce’s stable, where the Phantom reigns as the British coachbuilder’s bellwether. The newly revealed Phantom Platino, then, is a bellwether of a bellwether.

A bespoke example of the newly launched Series II Phantom, it’s named for the silver-white finish that demands attention of passersby. Echoing the marque’s early days, the front seats are finished in leather crafted in an Italian mill, while the rear’s are upholstered in fabric derived from bamboo fibers.

Both materials feature an original repeating pattern based on “an abstract interpretation” of the Spirit of Ecstasy ornament. The same design appears is its largest application on the dash, touchpoints like the armrests and center console, and the Phantom’s dash clock, which is surrounded by 3D printed ceramic.

The hallmark of the interior is of course Rolls’ starlight headliner, but the Platino’s has been made so that eye is drawn rearward, with shooting stars following a sweeping arc.

All Series II Phantoms have received subtle updates. Extra emphasis has been placed on the Spirit of Ecstasy, with the ornament’s position altered by the illuminated Pantheon grille with dark surround to make it more prominent.

The side profile reveals Rolls-Royce’s signature short front and long rear overhang, long wheelbase and broad c-pillar, while a “split-belt” line begins at the front fender and curves gently towards the rear door before falling gently towards the taillights.

“We are acutely conscious of our clients’ esteem for and love of their Phantoms. They felt it could not be improved; but while naturally respecting that view, we believe it is always possible, indeed necessary, to gently go further in our pursuit of absolute perfection,” CEO Torster Muller-Otvos said in a statement.

“The subtle changes we have made for the new Phantom Series II have all been minutely considered and meticulously executed. As Sir Henry Royce himself said: ‘Small things make perfection, but perfection is no small thing.’”

Nick Cannon Pledges to Undergo Vasectomy: I Don’t Need to Populate the Earth!

‘Better Call Saul’ Review: ‘Axe and Grind’ Is a Solid Deep Breath Before a Dangerous Reckoning

Patrick Mendes: Does He Really Own that Nice House in Austin, Texas?