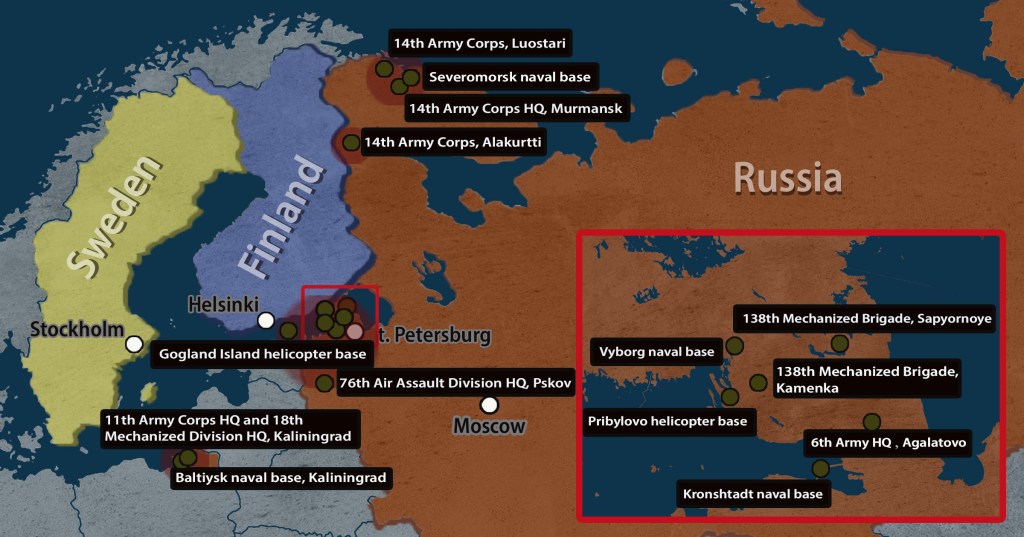 These are the Russian military assets close to Finland’s border and nestled between Nato members on mainland Europe (Picture: Getty/iStockphoto)

Vladimir Putin’s gamble that invading Ukraine would undermine the unity of Nato appears to have backfired spectacularly.

With a clear and present danger to unite them, member countries of the military alliance are more committed than ever to deeper security ties and the principle of collective defence.

Finland will soon be followed by Sweden in applying for membership, expanding Nato’s footprint across the north of the continent.

But the move also draws into focus a problem which predates the war in Ukraine and will exist long after: the proximity of the Kremlin war machine to European territory.

Russia’s Western flank, which already butts up against Nato at Estonia and Latvia, is heavily fortified.

Soon the alliance’s new outer extremity, extended by 800 miles along the east of Finland, comes to within a stone’s throw of even more of Russia’s vast military.

The Severomorsk naval base, the heart of its northern fleet, now lies just 115 miles from Nato’s border.

From here sleepless submarines equipped with nukes set out on long, silent journeys beneath the water, while destroyers and landing ships are readied for naval assaults.

The 200th Mechanized brigade is based at Luostari – less than 70 miles from Finland – and is currently using its tanks and rocket launchers in Ukraine.

Satellite images reveal it has a Cold War-era airstrip, barracks and rows of armoured vehicles and personnel carriers.

Finland and Sweden joining Nato would massively expand the alliance’s footprint in the north of Europe (Picture: Metro.co.uk)
Gogland, a tiny island in the Gulf of Finland turned into a military helicopter base in August 2019 (Picture: Google)
A base at Kamenka houses a mechanized unit equipped with portable launchers is little more than hour’s drive to Finland (Picture: Google)
Sapyornoye base, which is around 50 miles from the Finnish border, houses forces trained to operate in environments where chemical and nuclear weapons are in use (Picture: Google)
Alkaturi was used as an air force base during the Cold War and could be bolstered when Finland, 30 miles away, joins Nato (Picture: Google)

The 61st Naval Infantry Brigade, which has fought in the Donbas and Syria, is based at the Sputnik base just north of it.

It’s a similar story at Alakurtti, another base housing military vehicles and soldiers trained in Arctic warfare, little more than 30 miles from Finland.

Further south, units attached to the 6th Army based near St Petersburg are stationed towards the Finnish border.

Bases at Kamenka and Sapyornoye – both in active use, judging by satellite images – lie within 60 miles of the soon-to-be Nato member.

With Sweden on the brink of joining Finland and applying to join Nato too, the balance of power looks to have tilted dramatically in the struggle for influence over the Black Sea.

MORE : Explainer: What is Nato and which countries are members?