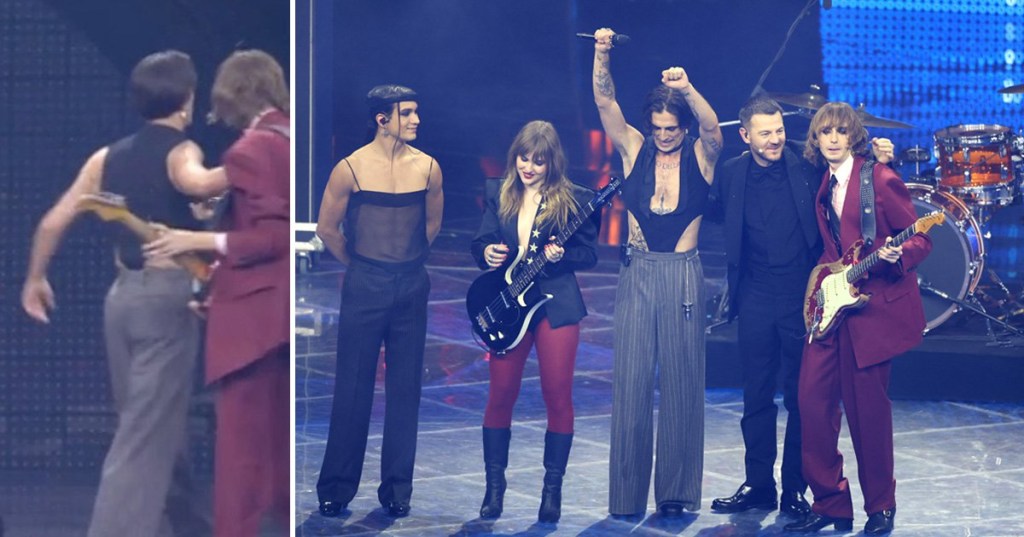 Eurovision fans were concerned for Maneskin singer Damiano David as he was seen limping on stage (Picture: BBC; Getty)

On Saturday night, 2021 Eurovision winners Maneskin returned to the stage to perform their new song Supermodel, rocking their stage as we knew they would.

However, some viewers of the 2022 competition expressed concern over lead singer Damiano David, after spotting that he appeared to be in considerable pain with a leg injury.

Following their performance, Damiano looked like he was limping as he spoke about working on Baz Luhrmann upcoming Elvis Presley biopic.

As the group walked off stage after performing one more song, Damiano leant on one of his bandmates for support.

Several people on Twitter speculated what could be wrong, with one person claiming that the musician injured his leg during a photoshoot earlier in the day, and is said to have not wanted to go on stage with crutches.

A number of Eurovision fans dubbed the singer ‘poor Damiano’, with one tweeting: ‘I hope his leg recovers.’

One concerned fan wrote: ‘Poor Damiano with his clearly painful leg,’ while another said: ‘Poor Damiano…hope his leg gets better!’

One praised the singer for putting on a brave face despite the injury, writing: ‘Props for Damiano for keeping it professional even after hurting his leg.’

Hope Damiano’s leg is okay, seemed as though he was quite hurting #maaneskin #Eurovision

for anyone whoâs wondering what happend to Damianoâs leg: he hurt it in a photoshoot earlier and was in crutches but he didnât want them on stage. 🙂 #mÃ¥neskin #Eurovision

MÃNESKIN WAS AMAZING GOOD JOB @thisismaneskin i love you #Eurovision ps damiano i hope your leg gets better soon!

Despite the injury, Damiano singer still took the opportunity to make a daring joke about that controversial moment after they were crowned the champions of the competition.

As the 2021 final unfolded, footage began circulating online showing Damiano bending towards the table which led many to speculate that he was using cocaine.

Blokecore: The men’s fashion trend throwing it back to Britpop’s heyday

Where have all the runs gone in MLB?

Asking For A Friend: Can you be in love with two people at once?