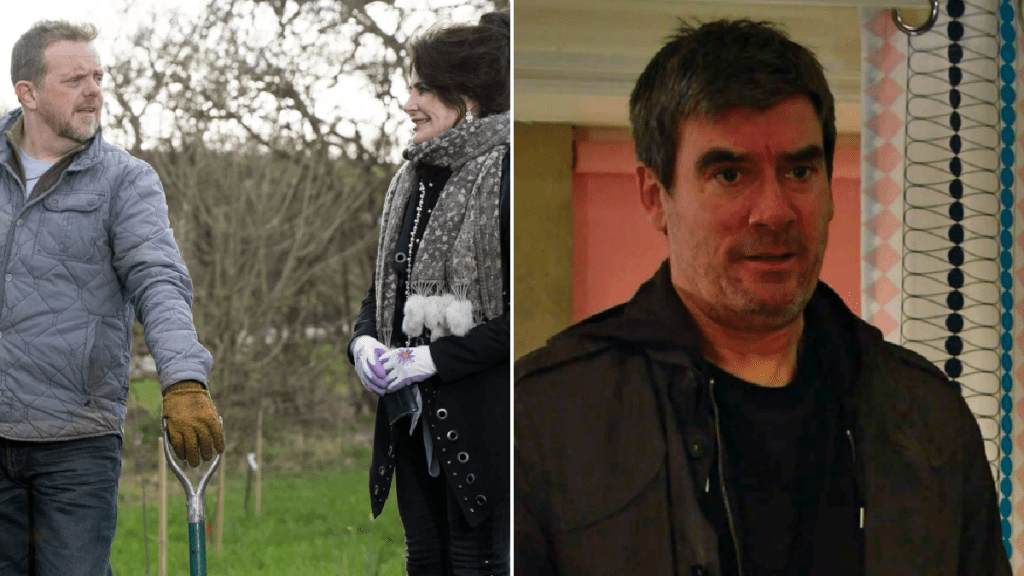 Cain is furious with Faith after her recent actions (Pictures: ITV)

After she persuaded him to let her take Kyle (Huey Quinn) to the allotment, Cain eventually agreed and took his son over, only to almost catch his mother in a very compromising situation with Dan Spencer (Liam Fox).

After that, Cain was in no mood to listen when she attempted to make things up with him, as Jeff Hordley explains:

‘If they would’ve got there a few seconds earlier, who knows what Kyle may have heard or seen. Certainly from Cain’s point of view, he’s absolutely gobsmacked. He’s really hurting and that’s the start of him really wanting to wash his hands of Faith.’

Jeff says that Cain has never forgiven his mum for leaving him as a child. ‘He was awake that night when she walked out,’ he says. ‘She thought he was asleep, but he was awake and left him with Shadrach – a drunk. He had to stand up for him and Chas (Lucy Pargeter) and he’s always felt as though Faith’s let them down. On the surface, men like Cain that are quite steely and hard actually are quite soft underneath, and all they want is a bit of mother’s love. He constantly wants Faith to do the right thing – but she doesn’t.’

In upcoming episodes, Cain reaches the end of his tether with Faith and says he wishes she was dead.

Moira (Natalie J. Robb)’s shocked by his words – because what she knows, and what Cain so far doesn’t, is that Faith’s cancer has returned. The character previously had treatment for breast cancer in 2018.

Will Cain regret his harsh words when he finds out that his mum is seriously ill?

What are the symptoms of bowel cancer?