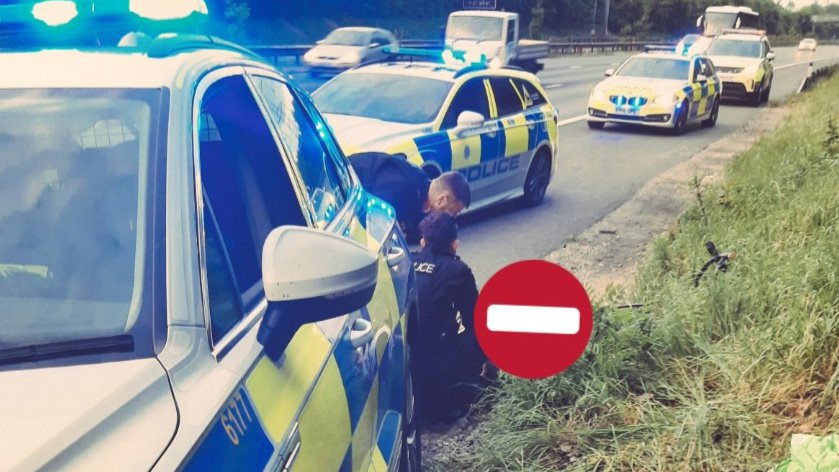 Hampshire Police said the had to be ‘forced’ to pull over to the verge and was arrested (Picture: Twitter/@HantsPolRoads)

A cyclist ‘carrying class A drugs’ was caught by police pedaling up a motorway.

The risky rider was spotted in the middle lane of the M3 at around 5am this morning.

Police were called after receiving calls about the cyclist near junction 13 at Eastleigh, Hampshire.

Specialist road officers were called in and asked the cyclist to pull over.

But he continued to peddle, even veering into another lane of traffic, before being forced to stop on the verge.

He was arrested for causing havoc on the road and on suspicion of carrying drugs.

An image from the incident posted on Twitter by the force showed four police cars surrounding a person being arrested by two officers.

Hampshire Roads Policing Unit said: ‘Called this morning at 0510hrs to reports of a cyclist cycling in Lane 2 on the M3 at Jct 13.

‘They did not want to stop for us, continued into Lane 3 and eventually had to be forced onto the verge area where the rider was detained.

‘Rider has been arrested for causing danger to road users and suspected possession of a class A substance.’

Danny Miller urges fans not to sneak videos of him in new Instagram video: ‘Just ask’

Psychic shares what your dreams say about your personality