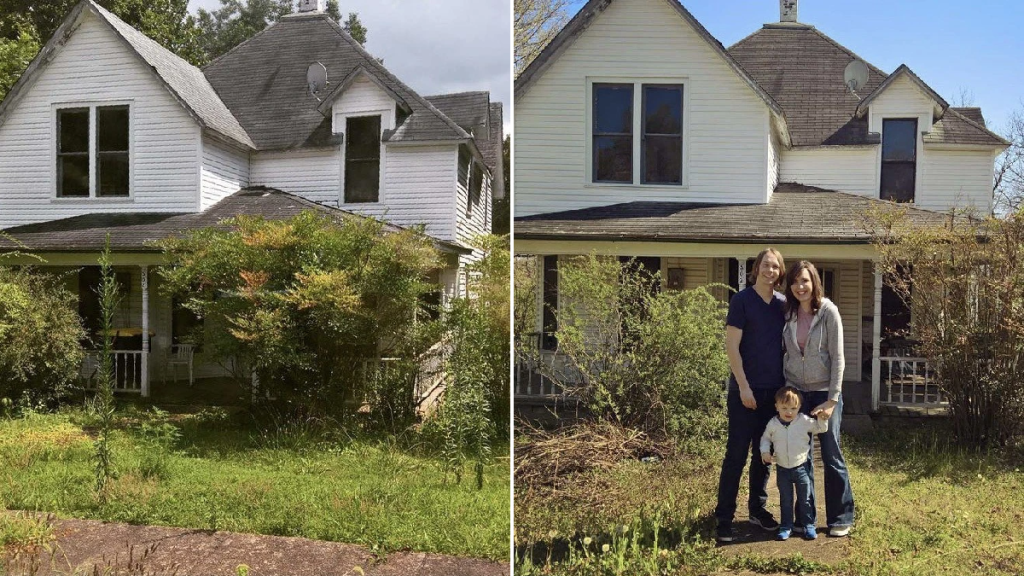 When Candi and Jake Whitlow saw an abandoned house covered in overgrown weeds, they knew it was going to be their perfect family home – they just had a mammoth renovation task ahead of them.

They had been looking for a larger house to raise their son Henry, who’s now six years old, in, and fell in love with this fixer-upper.

‘The house was in great disrepair, but it had so much charm,’ Candi explained.

‘The front porch is really what sold us – we’ve both always wanted a big old house with a nice front porch to hang out on.’

The wooden porch in question is indeed charming, but required some extra work to get back to its former glory.

Candi and Jake rebuilt the frame, adding a swing seat, flowers, a table and chairs, and new columns, bringing their vision to life.

Their attraction to the hidden gem became more meaningful when they discovered that Candi’s great grandmother’s house was a block away, while two of her uncles would regularly play here when they were kids.

Candi, 32, a stay-at-home mum, and Jake, 34, a service manager for a local car dealership, sold the house they had been living in, throwing their all into the project.

They now had just 60 days to turn this dilapidated house into a home.

With no time to spare, they set to work the day after they closed the sale. The list of jobs was daunting: the crumbling property needed new plumbing, electrical wiring, a heating system, and insulation.

There was standing water in the cellar, which took two weeks to drain.

The pair took on the challenge, managing to complete the works thanks to loved ones who chipped in to help.

‘It was a whirlwind of family and friends helping us get it out together enough to be able to move in…we ended up putting in a wood stove for our heat source this past winter,’ Candi said.

‘Since we were only living on the first floor, it worked quite well.’

The couple kept slaving away at home improvements, and four …read more

Ukraine’s Eurovision 2022 commentator Timur Miroshnychenko recalls outbreak of war before contest: ‘No one was thinking of Eurovision, just how to stay alive’

What is inflation and what happens when it rises?