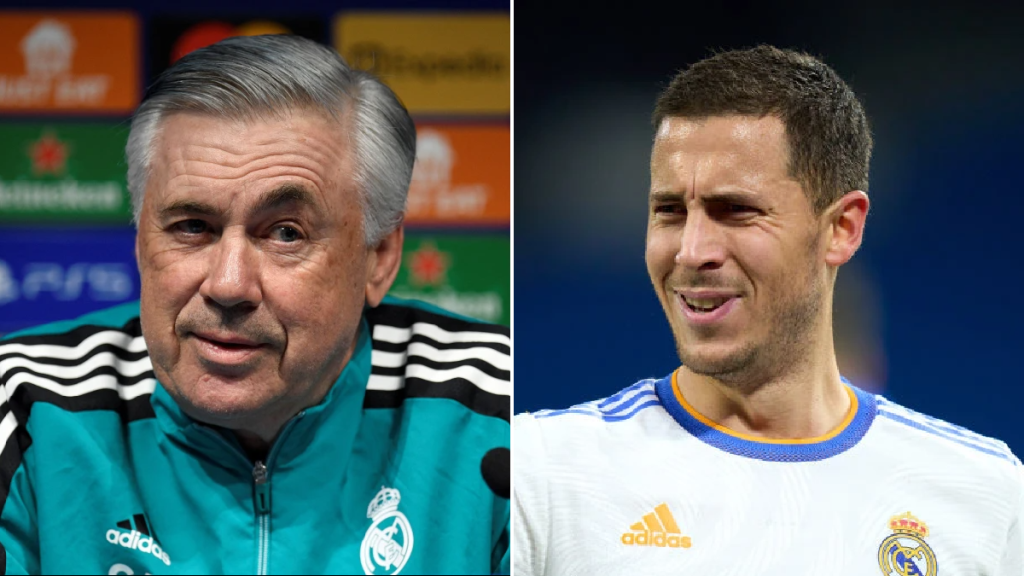 The Belgian winger has been linked with a move away from Real Madrid (Pictures: Getty)

Carlo Ancelotti has revealed that Eden Hazard intends to shun transfer interest in him and remain at Real Madrid this summer, with the winger determined to finally prove his worth at the Bernabeu.

The Belgian has struggled to make an impact in Spain since his £88.5million move from Chelsea in 2019, scoring just six goals in 65 appearances for the club in all competitions.

Hazard has been hampered significantly by injuries, while the emergence of Vinicius Junior – particularly this season – has limited his opportunities in his preferred position on the left wing.

Hazard has spent more time on the bench than the pitch (Picture: Getty)

That had prompted speculation that Hazard could return to the Premier League, with Arsenal discussing a potential move for the 31-year-old while Chelsea were also said to be considering bringing him back to Stamford Bridge.

Big-spending Newcastle had also been keeping tabs on Hazard’s situation, but Ancelotti has now dismissed the possibility of the winger leaving Real this summer and believes he can play a big role next season.

Asked about Hazard’s future on Saturday, Ancelotti responded: ‘His plan is quite clear: he is staying and he is doing so with a lot of motivation because he has had a tough time in these last years.

‘He wants to show his quality. Hazard’s plans are quite clear. He is staying next year.’

Asked if Hazard will get more opportunities and minutes next season, Ancelotti continued: ‘I think so. There are a lot of games, there is tiredness, there will be rotations even if this season there haven’t been as many. Everyone can have their chances.

Vinicius has been keeping Hazard out of the Real Madrid team (Picture: Getty)

‘A starting place at a big club is difficult for everyone, not just the players who play less. I continue to be of the opinion that the quantity of minutes is not as important as the quality.

‘This year we have the clear example of Rodrygo, who hasn’t played many minutes but has played quality minutes and has made the difference.’

Hazard has only started seven La Liga matches this season, playing 688 minutes in total, and has failed to register a goal while he has laid on only one assist, with his only strike in the 2021/22 campaign coming in the Copa del Rey.

Emmerdale spoilers: Charity has Noah jailed as they are torn apart forever?