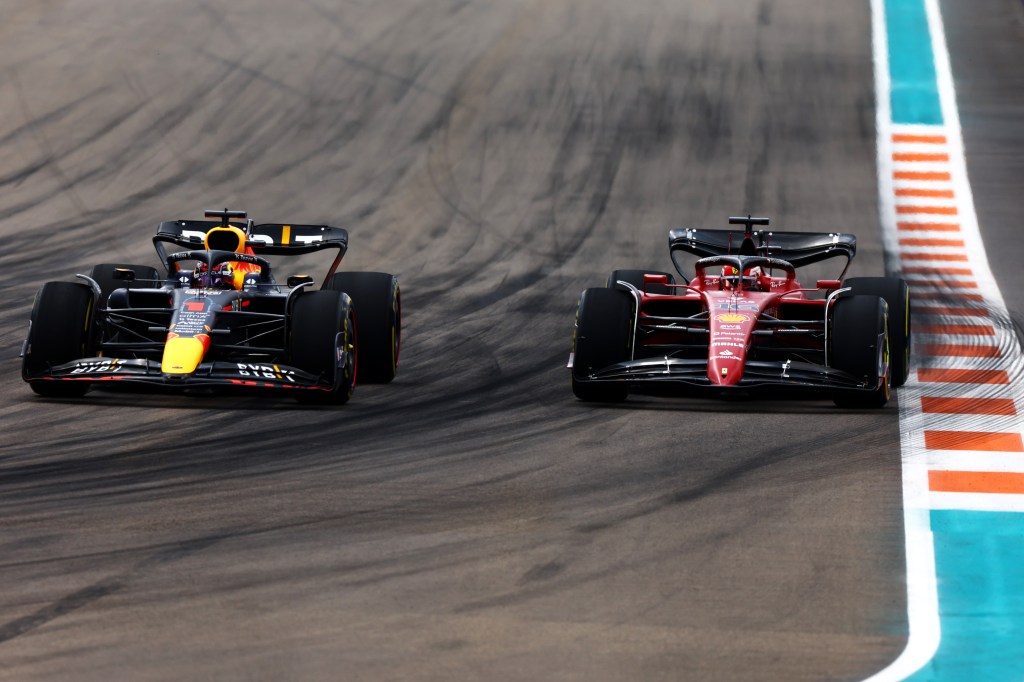 Max Verstappen and Charles Leclerc have won all five of the opening rounds of the 2022 F1 season between them. (Photo by Mark Thompson/Getty Images)

Red Bull advisor Helmut Marko has hit back at Mattia Binotto’s claim that they could be facing a Formula 1 cost cap crisis caused by the speed at which their car is being developed, and has taken a dig at the iffy form of Carlos Sainz in the process.

Ferrari team principal Binotto made the claim that Red Bull could effectively run out of money to spend after seeing his squad overtaken on pace by their rivals at the last two F1 races at Imola and Miami, which were comfortably won by current world champion Max Verstappen.

The Italian outfit still leads both championships thanks to Red Bull’s early season reliability problems, which have cost Verstappen two second places finishes, but a raft of car upgrades at the past two events has seen Christian Horner’s team take a significant stride forward.

The RB18 is now lighter than it was at the beginning of the campaign, and its increased straight line speed gives it a significant advantage over Ferrari’s F1-75.

All F1 teams are free to develop their cars throughout the season as they see fit, but are bound by an annual cost cap which limits total spending on the running of the team to $145m. Binotto said earlier this week he believed that red Bull could burning through that limit.

‘[Red Bull] have introduced upgrades and, if I look at the last two races, maybe they’ve gone a couple of tenths per lap faster than us,’ The Italian said. ‘It’s no doubt that, in order to keep the pace, we need to develop ourselves, including upgrades. I hope, because there is a budget cap, that at some stage Red Bull will stop developing, otherwise I think I will not understand how they can do that.

But Marko, who oversees Red Bull’s young driver programme and attends race weekends, insists Binotto is wrong and says that Sainz’s multiple crashes so far this season could mean Ferrari are the ones who have financial issues later down the line.

We plan our updates in such a way that we always lose weight with each update, because unfortunately we still haven’t reached the minimum weight,’ the Austrian explained. And we won’t quite reach it with the next update either.

‘I don’t think we are in a significantly different position to Ferrari [in terms of spending]. Especially since I wonder what effect it has on them that Carlos Sainz has already crashed the car several times. That can’t be cheap.’

Carlos Sainz has suffered multiple crashes so far in 2022. (Photo by CHANDAN KHANNA/AFP via Getty Images)