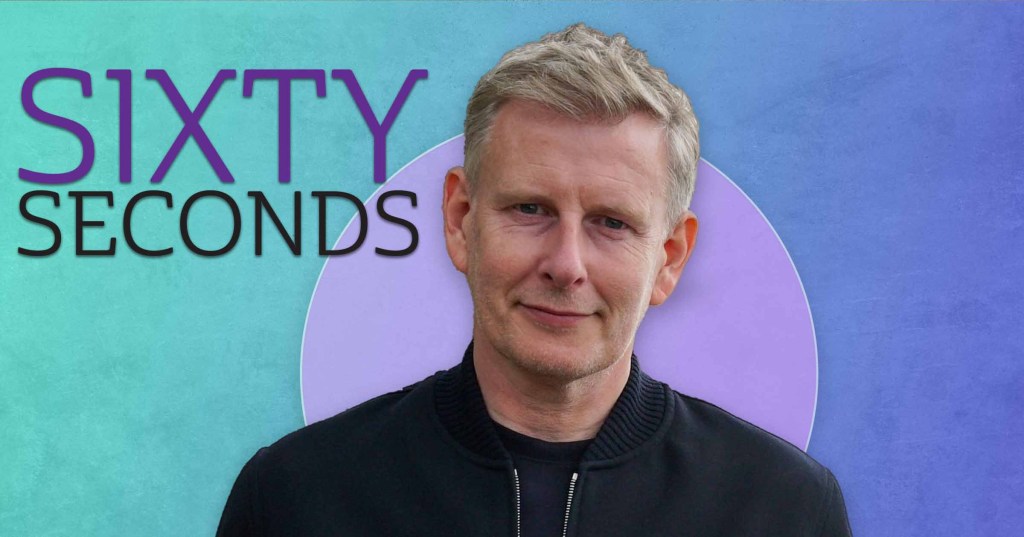 He’s also got some thoughts on that slap at the Oscars (Picture: BBC)

Comedian Patrick Kielty, 51, on his new tour, that Oscars slap and punching above his weight with his wife Cat Deeley.

The new tour is called Borderline. You’re obviously a big fan of the early hits of Madonna.

[Laughs] Yeah, the thing about it was I couldn’t really crowbar in any type of political comment on a tour called Vogue, so I felt Borderline was an easier fit.

I suppose it is but the lovely thing about people wanting to laugh at the weekends is that you get two or three days off at the start of the week.

People like to have a glass of wine and a chuckle from Thursday to Sunday so I think of it as more of a weekend break for me.

How do you put together a new show? Is it a brand-new page?

For me personally, it’s a new page. I think the first rule of trying to write a stand-up show is that it’s probably best not to do it unless you’ve got something to say. This is a lot more autobiographical than anything I’ve done before.

The comedian recently presented a documentary about the future of Northern Ireland (Picture: BBC/Dragonfly TV/Seamus McCracken)

It’s the story of the realisation that a binary society coming together in peace was more of a big deal than maybe I thought it was at the time.

Sometimes when you live through stuff, you don’t really appreciate it until you look back.

You were also involved with Kenneth Branagh and his Oscar-winning Belfast movie.

Yeah, I was really lucky Ken rang me up and asked me if I would host the premiere for Belfast in Belfast and that was just the most amazing night.

Jamie Dornan is a mate and to be in Belfast watching a Belfast audience watching that film, and having to get up and talk to the cast afterwards, and what Ken had been through and his Belfast story…

Obviously most people in Northern Ireland know my story [Kielty’s father was murdered by terrorists], so it was a really emotional night, but at the heart of Belfast is ordinary people.

I used to think that Northern Ireland was a bats*** crazy kind of place and now I look back and realise it was ordinary, decent people trying to live through bats*** crazy times.

Patrick says hosting the premiere of hosting Jamie Dornan film Belfast was ’emotional’ (Picture: PA)Does the Catholic/Protestant divide still exist? How do people even know what side anyone is on?

There’s about 10 or 15 minutes of material right there!

When I’m playing my English dates, it’s funny that English people think of Northern Ireland as this binary dysfunctional society when …read more