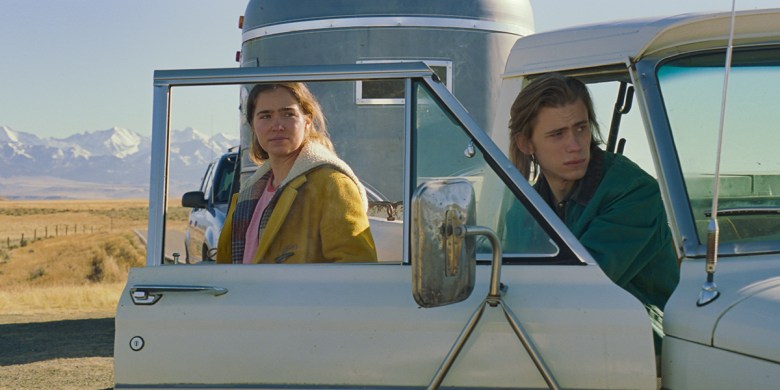 Both Owen Teague and Haley Lu Richardson are perfectly cast in this sibling drama. Both have the kind of rough and tumble exteriors you’d expect from a person living in the present-day American West. While not a prototypical Western, there are no gunfights or lawmen, this neo-Western covers the new (but familiar) confrontations happening among the mountains and the brush: Indigenous land stripped of resources and white men as a destructive, toxic influence. Amid the big sky, and wide landscapes captured by cinematographer Giles Nuttgens is a modest, tempestuous narrative. Co-directors Scott McGehee and David Siegel’s “Montana Story” is a patient, captivating portrait of the past that stays with us long after the wind stops blowing.

Products featured are independently selected by our editorial team and we may earn a commission from purchases made from our links.

As theaters begin showing signs of life and streaming and VOD options stay hefty, there are more movies (and platforms to watch them on) than ever to sift through, and IndieWire is here to help you do just that each week.

It’s a strange week at the box office — well, a “Strange” one, at least — as the latest Marvel Cinematic Universe outing still seems poised to dominate the multiplex, as no other would-be blockbusters dare to go up against “Doctor Strange in the Multiverse of Madness” in its second week of release. With Cannes and the already buzzed-about “Top Gun: Maverick” on the horizon, this seemingly quiet week of new releases is ripe for discovery. Not in a superhero mood? Wish you could be hitting the Croisette yourself? We’ve got some winners for you.

Among this week’s new releases: a pair of IndieWire Critic’s Picks from Sundances past, the latest from recent Oscar nominee Eskil Vogt, a meat-and-potatoes thriller from John Madden, and Rebel Wilson’s latest comedic misadventure. Frank Marshall has a new documentary, horror classic “Firestarter” gets the remake treatment, and breakout talents Owen Teague and Haley Lu Richardson star in a solid two-hander.

Each film is now available in a theater near you or in the comfort of your own home (or, in some cases, both, the convenience of it all). Browse your options below.

As new movies open in theaters during the COVID-19 pandemic, IndieWire will continue to review them whenever possible. We encourage readers to follow the safety precautions provided by CDC and health authorities. Additionally, our coverage will provide alternative viewing options whenever they are available.

“The Innocents” (directed by Eskil Vogt)
Distributor: IFC Midnight
Where to Find It: Select theaters, plus various VOD and digital platforms

The latest entry in the child horror genre, Eskil Vogt’s “The Innocents,” opts to take a very different path. Instead of juxtaposing childhood innocence against adult evils, it seamlessly combines the two. The kids we’re supposed to fear may have been born with deadly powers, but they’re simply children in the process of growing up. They play and explore, they experiment and make mistakes. They demonstrate the capacity for profound kindness and cruelty in equal measures. And when they kill people using telekinesis, it’s fair to wonder if the incidents are as preventable as a child falling while running with scissors.

“The Innocents” is a film about childhood as much as it is about murder, sharing as much DNA with “Boyhood” as it does “The Bad Seed.”Specifically, it’s a film about contemporary childhood and, in a dangerous world that forces kids to grow up faster and faster, whether innocence is even still possible. Read IndieWire’s full review.

Amy Duggar GOES OFF on Anna Duggar: Have Some Self-Respect! Your Husband is a Liar and a Cheater!