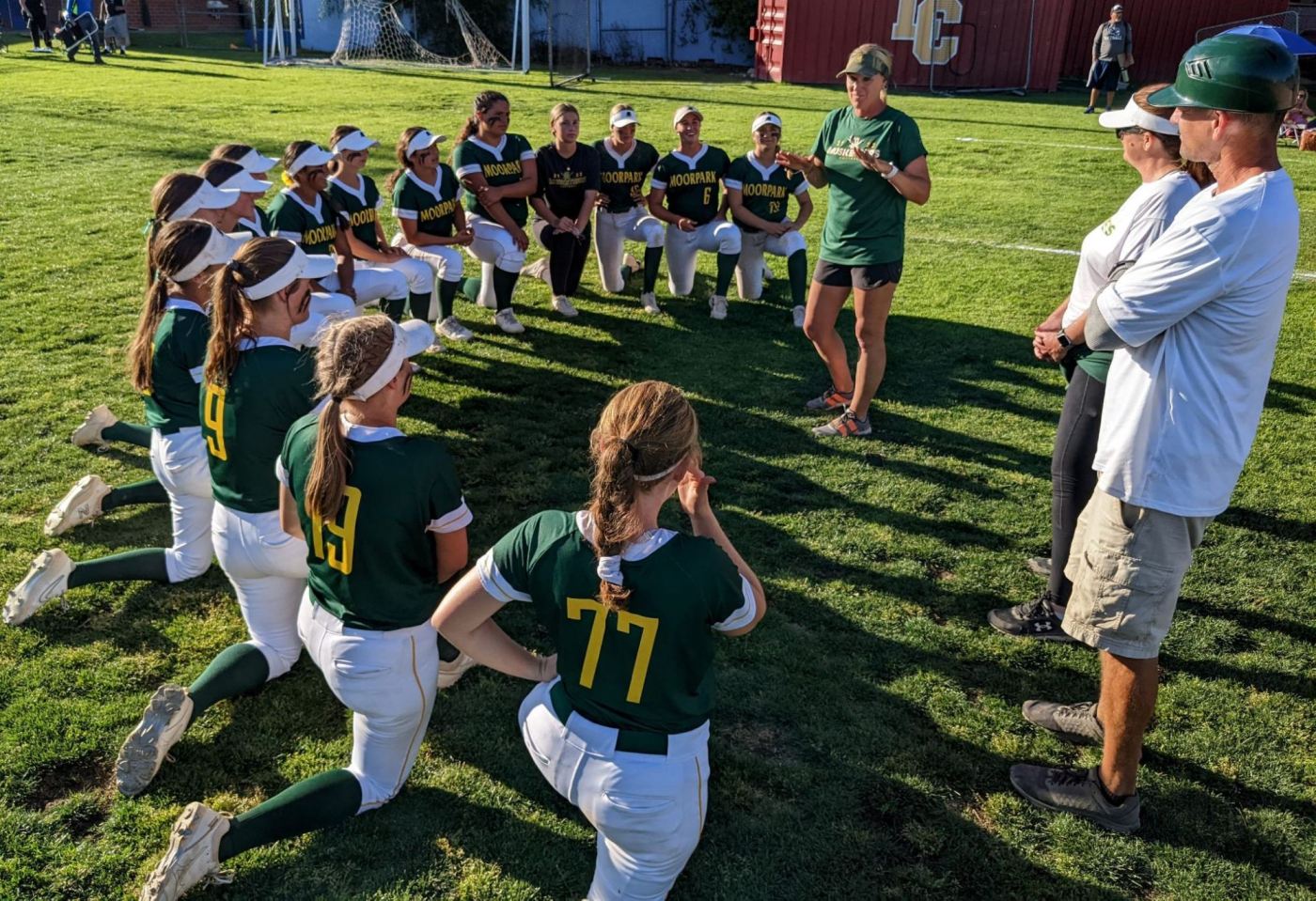 LA CAÑADA — For eight innings Thursday afternoon, Moorpark’s Madison Finnerty held it down in the pitcher’s circle. In the 10th inning of a game locked at no score, her duties changed dramatically.

With Taylor Cook on base, Finnerty stepped up and hit a single to score the first run of the game. Cook’s reaching dive for home plate was met by near-delirious screams from her teammates and stirred up much-needed momentum.

When the dust settled — literally — the Musketeers had defeated La Cañada 3-0 in 10 innings in the CIF Southern Section Division 4 softball quarterfinals.

“I just knew I had to get the ball down on the ground because we needed a run,” Finnerty said of her hit.

No. 1-seeded Moorpark (22-4) will host Heritage Christian in the Division 4 semifinals Saturday.

Cook pitched the final two innings of the game for Moorpark and went 1-2-3 in the bottom of the 10th inning to secure the win and a trip to the semifinals.

“The girls do an excellent job of feeding off of each other’s energy and they have done that all season long,” Moorpark coach Meaghan Stotts said. “It’s a crazy group. They’ve all been playing together since they were 6 years old.”

Sophomore Elle Leckrone pitched all 10 innings for the Spartans (21-7) and came up big with two catches for outs in the fourth inning.

“She’s a workhorse,” La Cañada coach Travis Lovejoy said. “We’ve never asked her to go that many (innings), but she was rolling.”

A game that seemed destined to go long from the start stretched even longer in the fourth inning, when both teams exited the field for roughly a 15-minute break as catcher Daniela Isarraras was evaluated after getting hit in the mask with a ball.

The intermission had little effect on the Musketeers, who gave up two hits in the frame but closed it out with two strikeouts by Finnerty.

“(My assistant coaches) were doing a fabulous job talking to the girls, keeping them prepared,” Stott said. “Kudos to them, because I watched them keep the girls locked in that entire time.”

Shae Anderson doubled off the wall in the sixth inning and Finnerty and Makenna Cerny both singled in the eighth inning, but Moorpark was unable to break through until the 10th.

With just two seniors on the team, Moorpark continues to build the skill set of a massive sophomore group throughout the playoffs.

“It’s pretty exciting for the seniors to experience this, having not been to the playoffs yet,” Stott said. “And then what an experience for the sophomores to come this far and get this type of repetition.”

She-Hulk Is ‘Not a Superhero’ in Pitch-Perfect New Trailer