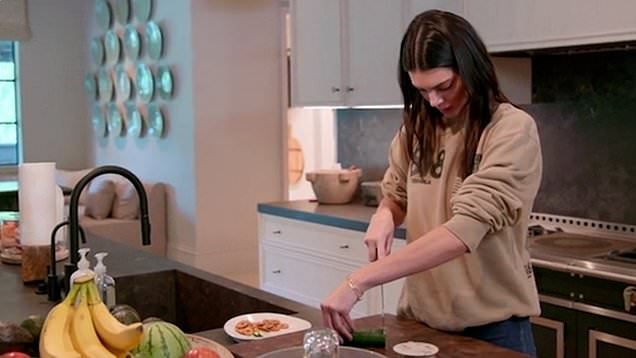 Today it seems there are two distinct groups of people: those who can cut cucumbers, and Kendall Jenner.

Please note the use of our comma there.

The reality star and supermodel is clearly trying to make her way in the world, proving that she has the talent to get where she’s going without the aid of her stupidly famous and rich family, but sadly, when it comes to her culinary skills it’s blatantly obvious the girl grew up with a personal chef.

In a clip from this week’s episode of The Kardashians, which has people rolling all over the floor in fits of laughter, Kendall was seen preparing herself a little snack attack.

Now, to many cutting a cucumber is the most basic of kitchen moves, but with Kendall she’s really making a meal out of this (ah thank you) as she attempted to slice a tiny morsel off the vegetable with her arms crossed over themselves, instead of…just…turning the dang cucumber around.

As one Twitter punter put it, Kendall is basically dislocating her shoulder to cut a cucumber.

While Kris Jenner could also most smell the viral video, seeing as the cameras were fixed on her daughter, Kendall continued to decline the offer of fetching ‘Chef’ – whom we can only assume is actually called Chef because surely in 2022 we’re using people’s names? – and insisted to the cameraman, evidently expertly stifling their laughter to give us a non-shaky shot, she’s not very good at ‘cutting’.

As one would expect, the internet was on one after this clip aired.

Riffing on some Arrested Development gold (which is fiction, may we add), one noted: ‘Kendall jenner cutting a cucumber is the most “it’s a banana, michael, what could it cost, ten dollars?” thing i’ve seen a rich person do in a long time [sic].’

Others wondered what Kris was doing: ‘Her own mum didn’t just step up and show her how to do it properly/ safety??!!’

iâm sorry but kendall jenner not being able to cut a mf cucumber ð­ð­ð­ the level of privilege to be in your mid/late 20s and not know how to properly cut a vegetable !!!!!! AND THEY PUT IT IN THE EPISODE !!!!

anytime you feel like you’re bad at doing something, watch kendall jenner chop a cucumberð­

Obsessed with Kendall Jenner trying to prove sheâs not an out of touch spoiled rich girl by insisting on making her own snack and almost dislocating her shoulder trying to slice a cucumber.

kendall jenner will never see your hateful comments about how she doesnât know how to cut a cucumber, but your friends …read more

Child welfare decisions should not be made by computer algorithms

Can Loyola’s Lucas Williamson make it to the NBA? There’s only one way to find out