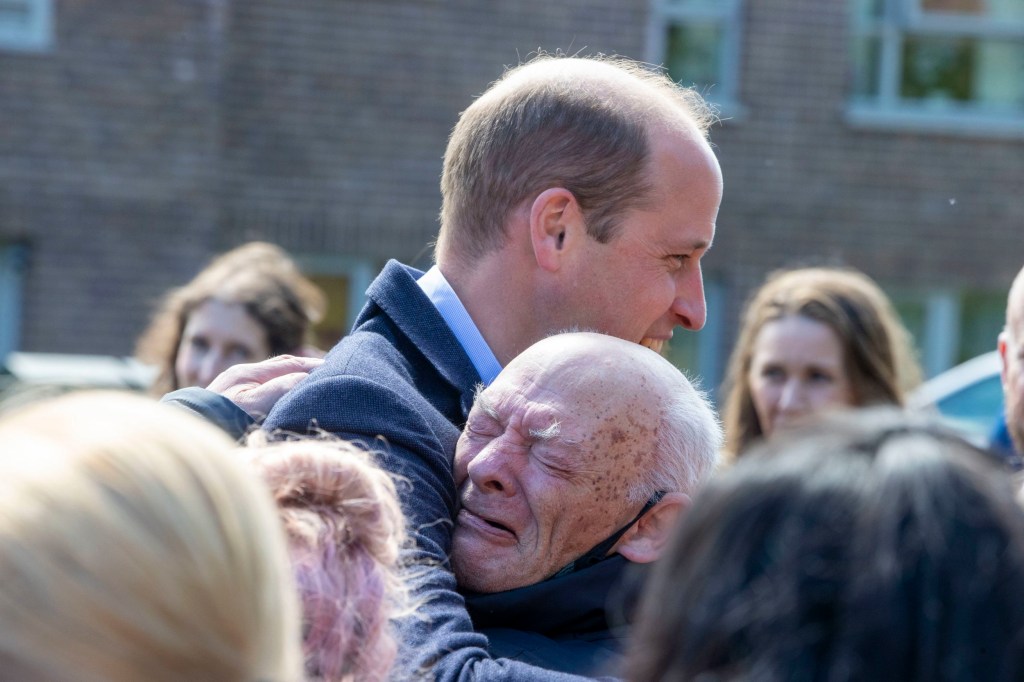 The Duke of Cambridge threw protocol to the wind when he put his arms around William Burns, 66 (Picture: PA)

A pensioner who shared a tearful embrace with Prince William said he was overcome with emotion because it reminded him of hugging his estranged son.

William Burns, 66, was among royal fans outside a homeless project in Glasgow on Wednesday when the Duke of Cambridge threw protocol to the wind and put his arms around him.

The Scottish pensioner looked visibly moved by the gesture, breaking down in tears as he hugged the future King back.

Now, the grandfather-of-25 has revealed why the moment meant so much to him.

The Kennishead resident said it had a particular significance because he had fallen out with one of his sons during an incident which led to him being evicted.

‘I am a grandfather. It felt like a son hugging a father,’ he told the Daily Mail.

‘It was the way he hugged me. I didn’t expect that really to be honest. It was a boost. I’ve never felt anything like it in my entire life before and my existence as a human being.’

Mr Burns fell out with his son after he received four anti-social behaviour notices that led to him being evicted and briefly made homeless.

This came after the tragic death of his first wife Jean, his ‘first love’ who passed away while in his arms.

‘She fell pregnant (in the 1970s) and I had to marry her,’ Mr Burns said, chuckling. ‘I fell in love with the girl and she did the same with me.’

‘Matthew was Jean’s son but I took him as my own,’ Mr Burns said.

After his eviction, his luck soon turn around when he met second wife Ellen, who he eventually moved in with.

The pensioner now suffers from the chronic lung condition emphysema, which causes shortness of breath and can lead to chronic obstructive pulmonary disease (COPD).

He described meeting Prince William as a ‘boost’ saying he originally went out to see him after noticing ‘all the commotion and excitement’ at his arrival.

He said: ‘I thought I would go down for a peek-about. My wife was down there and I was standing talking to people who know me well because I am one of the longest people living here.

‘I saw Kate and thought, that lady is wonderful. She is beautiful and clearly a beautiful person.

‘I was standing with my wife when William came over to the crowd.

My date wet the bed and pretended nothing had happened