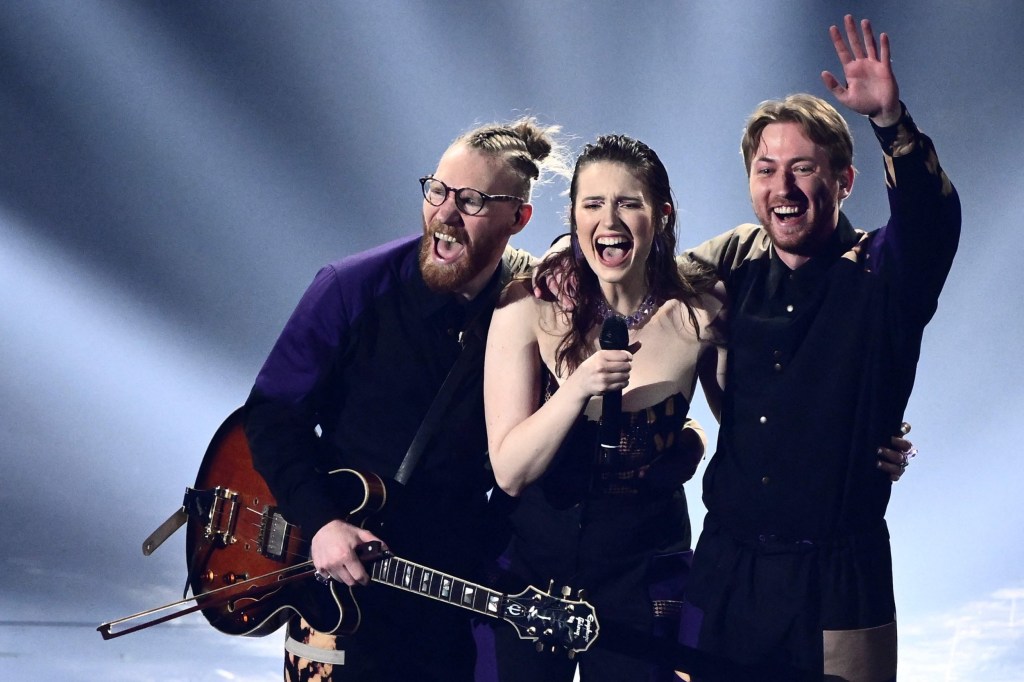 Eurovision’s Czech Republic act We Are Domi urged the ‘lads and lasses’ of Leeds to vote them into the final.

The electropop band, made of Casper Hatlestad, Dominika Hašková and Benjamin Rekstad, formed while studying at Leeds College of Music in 2016, meaning it left a special place in their hearts.

So far, Czech Republic, who made their Eurovision debut in 2007, have reached the Grand Final three times, but are yet to take home the title.

Before performing in Thursday’s semi-final, hoping to secure a place on Saturday’s show, We Are Domi guitarist Casper urged the ‘lads and lasses’ of Leeds to support them.

‘Please lads and lasses, vote for us,’ he said.

The trio joined as a ‘one time thing’ for a project while they were studying before releasing their own music in 2018.

We Are Domi will be the first to perform tomorrow night (Picture: AFP)

Speaking to the BBC ahead of their successful semi-final performance, Casper said: ‘Leeds is our second home.

‘We lived there for five years and we’ve been on the underground music scene for so many years and we were really, really inspired by it.’

He added: ‘Guys, by voting for Czech Republic, you’re voting for Leeds,’ before giving a shout-out to their former ‘lovely neighbours, Julie and Ian,’ saying: ‘We miss you so much and we hope you’re proud of us.’

The band formed in 2016 in Leeds (Picture: Reuters)

We Are Domi will be taking to the Turin stage to perform their song Lights Off and opening Saturday’s show, after qualifying in yesterday’s semi-finals where Casper actually made his own guitar so that he could play it like a cello.

Elsewhere on yesterday’s second instalment of the semi-finals, Ireland’s entry Brooke Scullion was in tears as she thanked fans for their support after her shocking elimination.

Brooke’s song That’s Rich, although highly popular, didn’t qualify her for the finals. However, the former The Voice UK star held her head high and vowed to keep making excellent pop tunes.

Speaking to her devastated fans on Instagram, through the tears, Brooke said: ‘Ok so it didn’t go our way tonight, but we are so happy with what we did.

‘It just maybe isn’t for me right now but maybe in the future bigger things will come, I have an EP coming out.

‘Thank you everybody who voted, I couldn’t have done anymore so I’m so happy.’

Joe Sugg compares himself to Come Dine With Me’s ‘whisk guy’ after Bake Off fainting spell: ‘I’ve gone down in meme history’

Woman shot to death while confronting burglars in Gresham