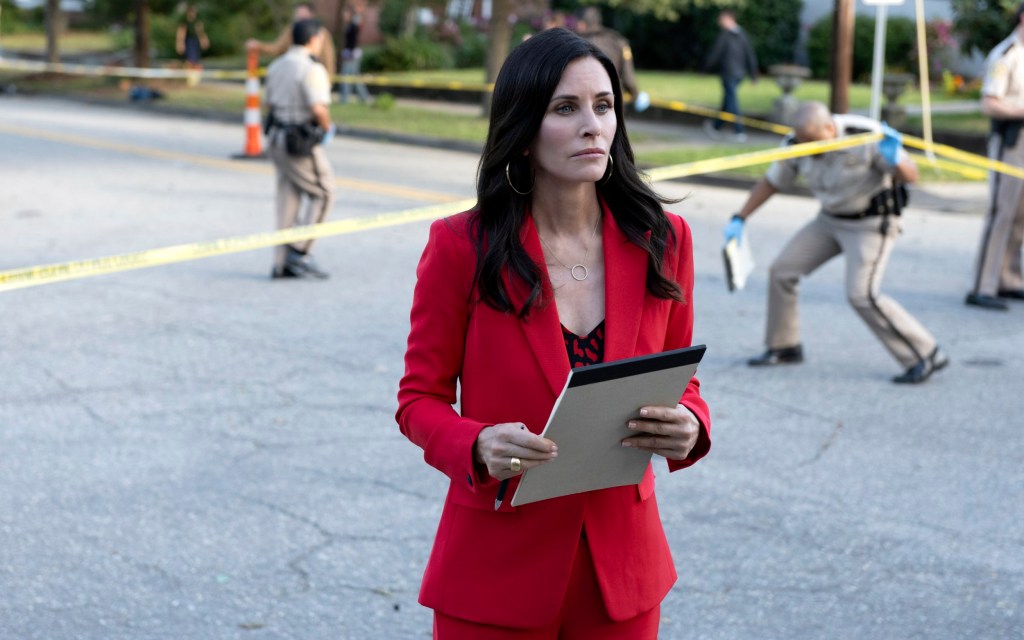 Could Gale Weathers be returning to the Scream franchise? (Picture: AP)

Scream fans, it’s time to get excited as Courteney Cox teased that she could be returning to Woodsboro.

Film bosses confirmed that the sixth instalment of the slasher franchise was on the way shortly the release of the fifth film – simply titled Scream – at the beginning of this year.

We were once again sent into a spin this week when it was claimed that Hayden Panettiere has reprised her role as Kirby Reed, and now Gale Weathers herself could be on the way back as well.

In a chat with Entertainment Tonight, Matt Cohen couldn’t help but questioning the 57-year-old on the sequel.

‘I don’t know about contracts and where things are, but I’ll tell you in the script — it’s a really good one,’ she replied.

‘You actually have to be killed if you talk about it, so I’m not going to say anything.’

Neve Campbell also teased that she had been ‘approached’ to return (Picture: Paramount)

Can we please protect Gale from Ghostface?!

The most recent Scream sequel was released at the beginning of the year and became an instant success at the box office, growing more than $140million worldwide.

Scream 6 was announced shortly after, with Jenna Ortega, Melissa Barrera, Jasmin Savoy Brown and Mason Gooding returning to the fold.

Principal photography is slated to start this summer, with Neve Campbell previously stating that she had been ‘approached’ for Sidney Prescott’s comeback.

Radio Silence’s Matt Bettinelli-Olpin and Tyler Gillett are set to return as directors, with James Vanderbilt and Guy Busick serving as scriptwriters once again.

Kevin Williamson, who famously created the franchise alongside late director Wes Craven, is back on board as executive producer.

Hayden is thought to be back as film buff Kirby, who was last seen in the fourth outing, beside Emma Roberts and Rory Culkin.

Fans have always wondered what exactly happened to her character, with snippets in Scream 5 appearing to confirm that she didn’t actually succumb to her injuries.

Earlier this year, director Tyler Gillett addressed the mystery and confessed that they wanted to do more with Kirby in the future.

‘We reached out to Hayden. We always knew it’d be such a fun question to answer. We certainly know that there is a real kind of critical mass around the Kirby thing online. And for our money, she’s one of our favourite characters in the franchise,’ he told Collider in January.

‘We love Hayden’s work in that fourth movie and thought it would be really fun to provide some conclusive evidence of her survival. And we reached out to her and at some point, we wanted to have her …read more

Search for survivors after plane crashes into Cameroon forest

What is salmonella, what are the main symptoms and how long can it last?